“Geodesic domes grow [plants and food] so much better” 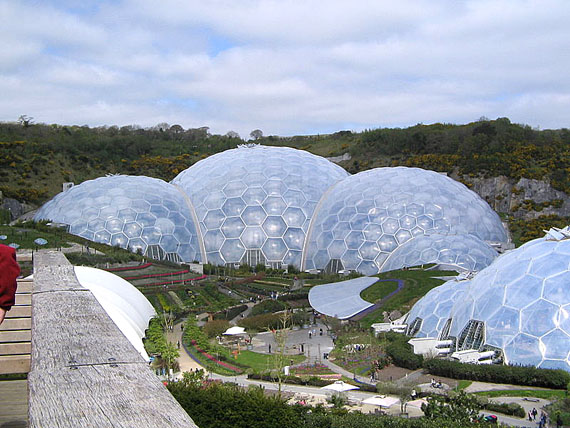 Entrepreneur Nathan Lawlor hopes to find enough support to build two geodesic domes as greenhouses in Pangnirtung. The domes would be similar to these structures in Cornwall, U.K., but upgraded for the Arctic climate. (PHOTO FROM WIKIMEDIA COMMONS)

A former Pangnirtung resident aspires to bring down the price of food in the community by growing it locally on a large scale, in greenhouses.

Toronto resident Nathan Lawlor, who lived in the Baffin community between 2005 and 2008, hopes to raise enough money and interest to build two geodesic domes as greenhouses which he says could produce about 7,000 pounds per year of fruits, vegetables, herbs, spices, house plants and flowers.

“I just think the price of food up there is crazy,” Lawlor said. “Like with the freight charges, mark-ups and everything. All the fresh foods have to be flown in.”

The 28-year-old former Nunavut resident said he became familiar with the high price of food as an associate manager with the North West Co. in Pangnirtung.

“Their mark-up practices were absolutely extreme,” he laughed.

“So I think this project would be beneficial to the community, because it would provide them with more nutritional value for their diet.”

Lawlor’s plan calls for the construction of two geodesic greenhouse domes. Each is a spherical structure that would measure 42 feet in diameter, and house a 2,500 square-foot garden.

Costs to start up the project amount to $29,000, he said, which includes construction materials, shipping costs, construction costs, supplies and manpower.

The domes are to be designed and built by a firm that specializes in such construction, which Lawlor could not name to protect the company’s confidentiality.

“Geodesic domes grow [plants and food] so much better,” he said, adding that such structures cost less to build than conventional greenhouses.

“What I’ve required from them is to go above and beyond what they currently have, to upgrade it to withstand the temperatures and wind speeds,” he said.

Each dome would run primarily on solar power, he said, which would help offset energy costs in the winter.

No such project has been attempted on such a scale in the North, but even so, Lawlor said he has found a manufacturer and enough public interest to make it feasible.

His first big step is funding and support, starting with an online awareness campaign and fundraising through FundRazr.com, where the project is listed as Pangnirtung Greenhouse Corporation.

Lawlor hopes to raise up to $150,000 through this method. The rest would be covered by public and private grants for northern projects.

Once funding falls into line, Lawlor hopes to have construction started in June next year.

For now, the project remains a work in progress, he said, hopeful that interest translates into firm funding for the project.

If successful, Lawlor hopes to expand the project to other communities in Nunavut.