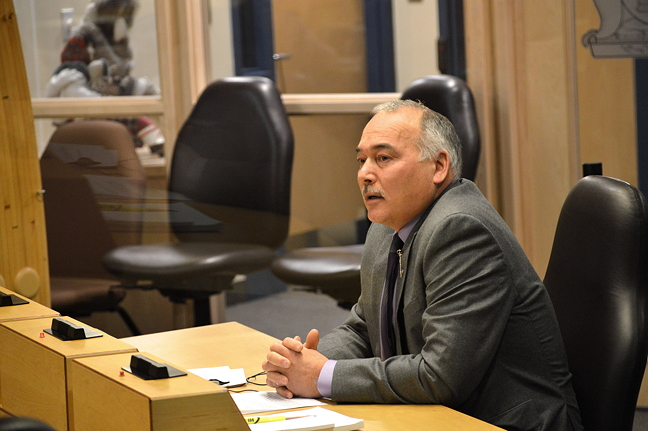 Arviat South MLA-elect Joe Savikataaq was one of three candidates for premier from Nunavut’s Kivalliq region. 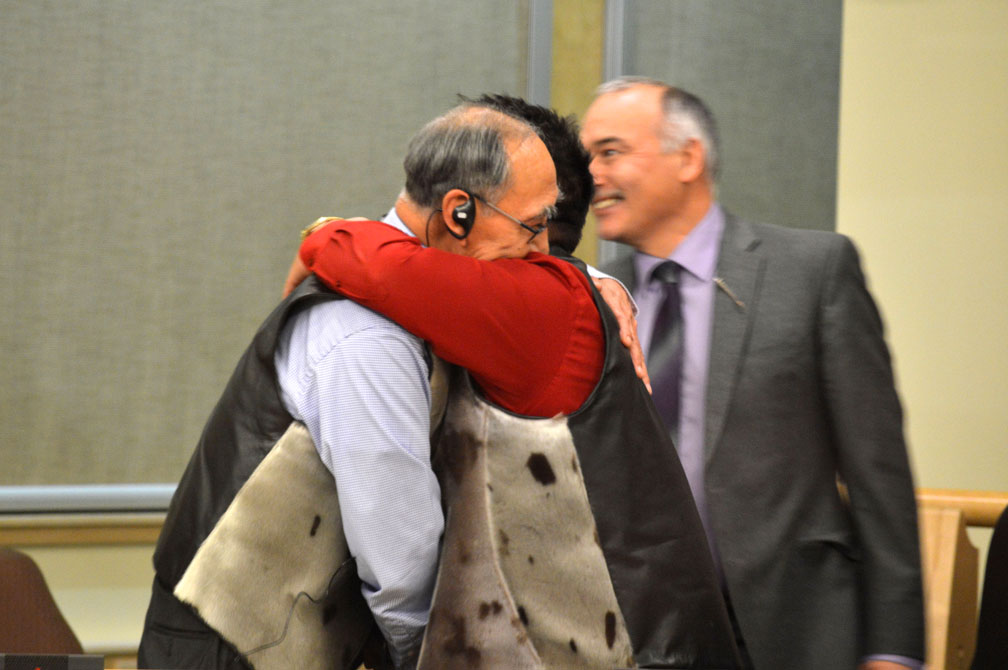 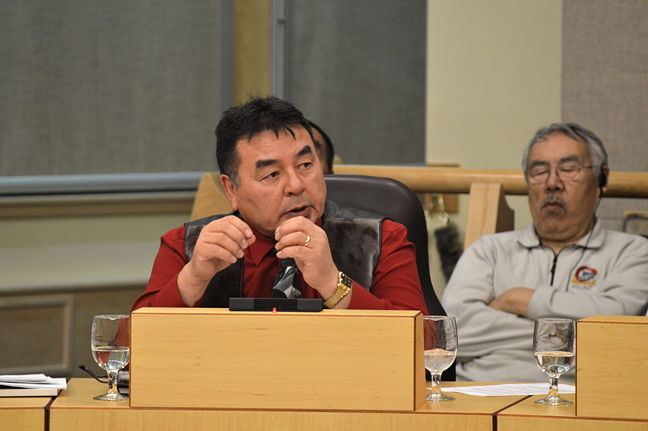 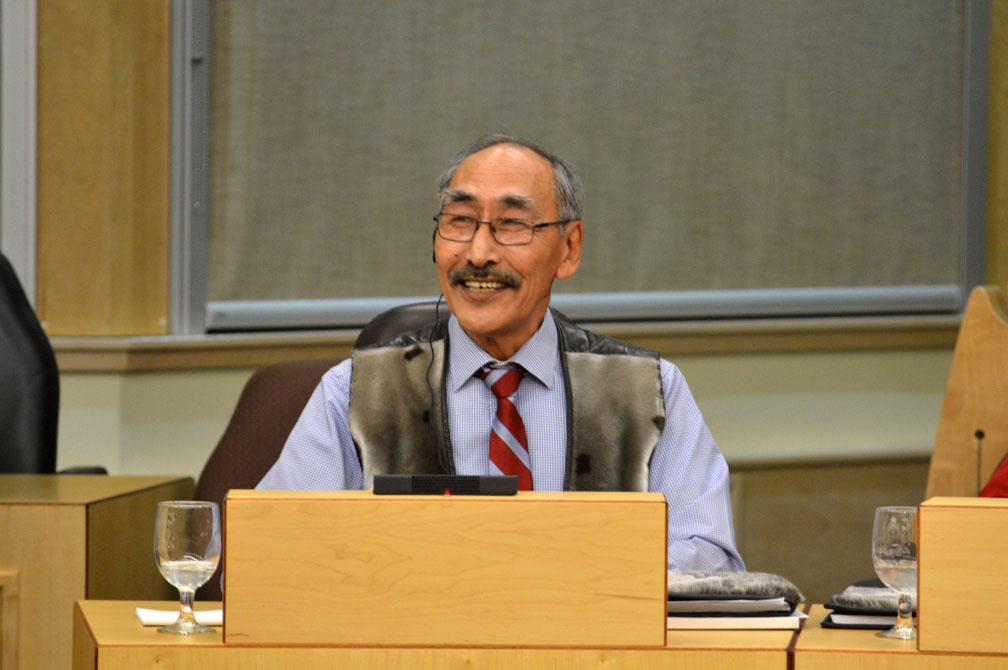 Aggu MLA Paul Quassa allows himself to smile after learning that he will become Nunavut’s next premier. “I signed the Nunavut Agreement, and now here I am,” he said. (PHOTO BY STEVE DUCHARME) 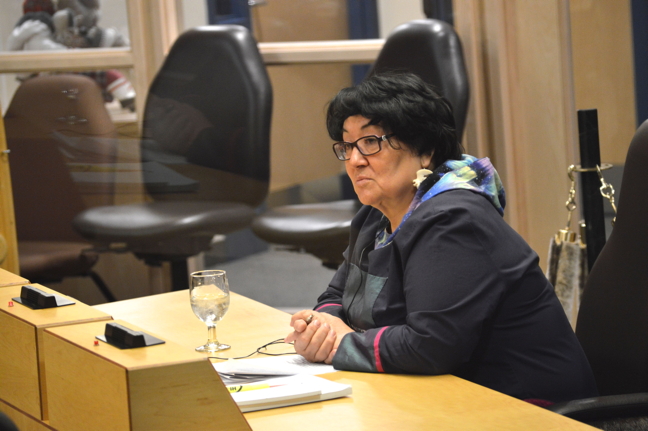 Rankin Inlet North-Chesterfield Inlet MLA-elect Cathy Towtongie was the only woman running for the premier’s job.

Nunavut’s newly elected MLAs have rallied behind Aggu MLA Paul Quassa, electing him to serve as the territory’s next premier when Nunavut’s fifth legislative assembly convenes next week.

“I’m out of words,” Quassa said in a brief statement in the assembly following his decisive victory after the first round of balloting.

“I will serve you and work with you closely, let’s have good success in the next four years.”

Quassa told Nunatsiaq News shortly after winning that his heart was still racing from the announcement, but after running—and losing—in the race for premier in 2013, the appointment came as a relief.

“I signed the Nunavut Agreement, and now here I am,” he said about his career in Nunavut politics coming full circle.

Quassa’s victory at about 5:20 p.m. wrapped nearly six hours of questioning from MLAs-elect, in a leadership forum chaired by Tununiq MLA Joe Enook, who was acclaimed as Speaker for the fifth assembly prior to nomination of premier candidates.

“Lets get to work,” Enook said shortly after assuming his duty as the forum’s chair that morning.

Earlier in the day, the four premier-hopefuls spent 10 minutes each addressing their peers ahead of a multi-hour question period during which they answered up to two questions from each MLA-elect.

“When we stand united, we can accomplish great things,” Netser said in his pitch to the assembly.

“Nunavummiut, the majority of which are Inuit, want a leader that understands them, that can communicate and listen to their views,” Quassa said during his turn at the podium.

“All 22 of us have to decide the best way to use the resources we have,” Savikataaq said.

Candidates were split on a solution to arguably the most contentious issue from Nunavut’s last government—its failed effort to amend the territory’s Education Act.

Quassa and Savikataaq, both ministers during the last legislative assembly, said the government must continue to push for amendments to its Education Act, or risk contravening language deadlines for school curriculums.

The varying solutions presented to Nunavut’s educational shortfalls suggest that a compromise on the issues may prove as elusive for the upcoming government as it did under Nunavut’s forth assembly.

“Something has to change, because last time, in four years, we could not get it done,” Savikataaq said.

“[The Education Act] has to move forward, and for Nunavummiut this has to be reintroduced into the legislature,” Quassa said.

“It needs to be changed and that would be my first priority because our children are our future.”

Towtongie and Netser both stressed improving partnerships with Inuit organizations and regional authorities, highlighting a focus on Inuit traditional values.

“I know we need to protect our languages and see our children graduate and lead productive lives,” Netser said, adding “I would need input from all of you to go forward.”

“Education affects everybody,” Towtongie said, adding any policy needs to be developed in partnership with Nunavut Tunngavik Inc. and district education authorities.

Following the election of Nunavut’s next premier, MLAs-elect turned their attention to choosing seven members for executive council, or cabinet.

After brief speeches to the assembly, MLAs-elect chose seven of those candidates, in a result announced around 7:30 p.m.

That makes Savikataaq the only member of the previous government to return to a cabinet job.

Hickes, who served as health minister in the fourth legislative assembly, looked shocked after the vote results were announced.

The premier, the Speaker, cabinet ministers and regular MLAs will be formally sworn in when the fifth legislative assembly convenes for the first time as Nunavut’s government, Nov. 21.