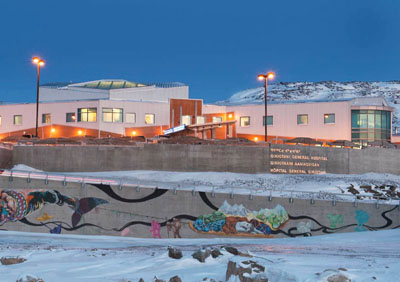 A Nunavut-based francophone health network is calling on the Government of Nunavut to put a consultative body in place to track and guide language issues at the territory’s largest health centre.

The comments come a day after the Office of the Language Commissioner of Nunavut released a highly critical report saying a lack of Inuktitut and French-language services at Iqaluit’s Qikiqtani General Hospital could be putting patients from those language groups at risk.

The report, completed last October but only released May 10, found no known language policy or plan in place at the hospital, leaving the vast majority of services available in English only — to the detriment of Nunavut’s other official language speakers.

The report speaks to “a well-known situation” within Nunavut’s francophone community, said the Réseau santé en français au Nunavut, an organization that works to improve French-language health services in Nunavut.

“Francophone and Inuit communities must be consulted in order to ensure that the right policies and services are put in place,” said the group’s president Dr. Émilie Cyr.

“This government should not tolerate lower quality services which put the security of patients for whom English is a second language at risk.”

The group called the absence of a language policy, and the use of family members as interpreters as detailed in the report as “very worrisome.”

As part of the process to develop a language policy, the GN’s health department must consult with both the francophone and Inuit community, the group said.

Nunavut’s Official Languages Act, which finally came into force in 2013, establishes Inuktitut (Inuktut), English and French as the territory’s official languages, and requires territorial services to be made available in those three languages.