Fresh roster of young lawyers heading for the Nunavut bar

“There’s a need for resident lawyers” 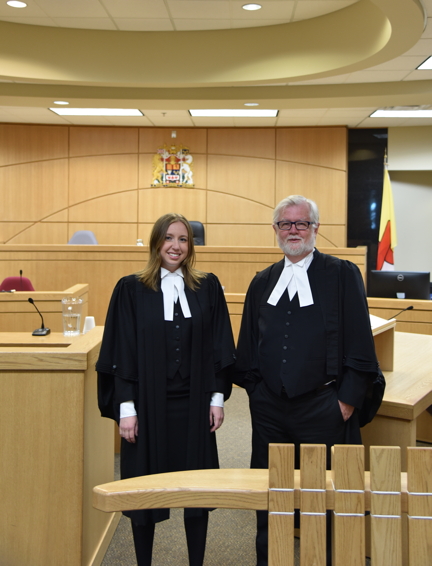 Sarah Bailey and her main articling principal, veteran Crown prosecutor Barry McLaren, pose at a small ceremony at the Nunavut Court of Justice June 15, when Bailey was called to the Nunavut bar. (PHOTO COURTESY OF SARAH BAILEY)

Look out for a new batch of lawyers, Nunavut.

Not since the Akitsiraq Law School graduated 11 fresh legal minds a decade ago have so many students been called to the bar at the same time.

“So since then we’ve had, from time-to-time, one, maybe two, articling students in the territory — let’s say at the Crown’s office or with legal aid — who were called to the bar,” said Nalini Vaddapalli, CEO of the Nunavut Law Society.

“This is the first time we’ve had five articling students being called to the bar,” said Vaddapalli.

One of those called to the Nunavut bar was 26-year-old Sarah Bailey. She’s the first to go through all post-law-school testing and training in Nunavut.

“Other people have done their supervised work up here before and then typically what they’ve done is they do the course work in another province,” Bailey said.

But this is the first time the Nunavut Law Society put on the bar admission course, as part of a new partnership with the Law Society of Manitoba.

Articling students can now article here, write their Nunavut-based bar exam in the territory, as Bailey did, and be called to the bar in Nunavut.

That’s a bit unusual. Most lawyers pass the bar in other provinces and then transfer up to Nunavut.

“My first and only bar call is to Nunavut, rather than somewhere else and transferring up,” Bailey said.

Bailey intends to stay and work in Nunavut and Vaddapalli suggested that might be the start of a new trend.

“It’s very exciting to see that they are students who want to come to Nunavut and consider not only articling but I’m confident that at least half of them will want to stay in the North after this experience,” Vaddapalli said.

Keeping lawyers in Nunavut is crucial, she said, because most lawyers who hold membership to the Nunavut Law Society don’t even live here.

“About two-thirds are still not resident. And one-third are resident,” Vaddapalli said.

“So of course there are reasons why we want to have more resident lawyers. Not only [does it benefit] the Crown, legal aid office, but private practitioners, because people in their territory want to meet their lawyers face-to-face,” Vaddapalli said.

And Vaddapalli is excited about what these young students will contribute to the North, with their interest and enthusiasm.

“They want to learn more about Aboriginal law. They’re passionate about the North. So that’s the type of lawyers we want up here,” Vaddapalli said.

Bailey, originally from Victoria B.C., is keen on practicing criminal law and she has her eyes set on working at the Public Prosecution Service of Canada in Iqaluit. And it’s not just a passing fancy for the resumé.

“I think I’d like to stay and build a career,” Bailey said. “I see it as more than a stepping stone. Absolutely.”

Bailey completed a co-op program here in Iqaluit in 2012 and 2013 from the University of Victoria. That’s how she ended up in the North.

“And I kind of fell in love with the territory from there,” Bailey said.

And she suspects the new north-south program she completed will help encourage the right lawyers to come to Nunavut and stay.

“I think getting off a plane and practicing in such a different environment can be challenging,” she added.

“I think it’s a great way to make sure you’re getting people who want to actually be here, and stay here.”