“The whole project has been really exciting for people to relive” 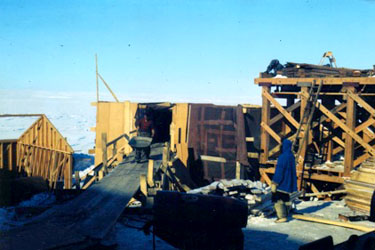 Inuit employees work at the nickel mine in this undated photo. (GN ARCHIVES) 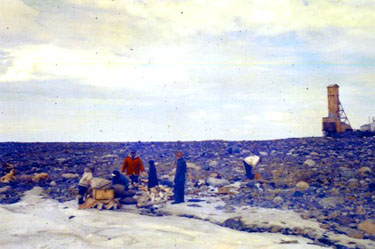 A dog team rests while a Royal Canadian Mounted Police officer and a Rankin Inlet miner pack a qamutik just outside the nickel mine. (GN ARCHIVES) 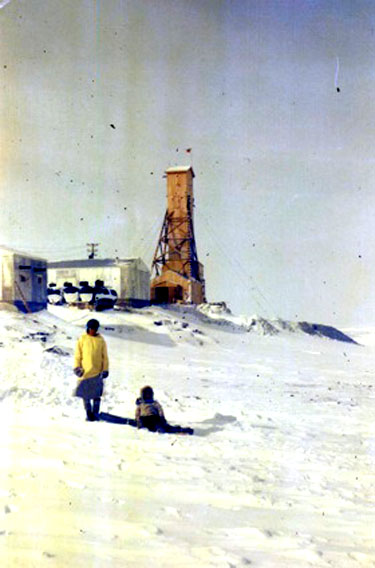 This photo of an Inuit woman and child was taken in front of the North Rankin Nickel Mine the year it opened, in 1957. (GN Archives)

A Kivalliq-based research project is helping trace the journey of Inuit families from “igloo to mineshaft.”

That’s how Peter Irniq describes the transition many of Nunavut’s original miners made when they left their traditional camps to work at the North Rankin Nickel Mine in the late 1950s.

The nickel mine, one of the first in the Arctic, operated outside of Rankin Inlet from 1957 to 1962, before the community was even established.

It was also the first mine in the country to employ aboriginal workers.

Irniq is the cultural consultant for the Rankin Inlet nickel mine research project, a collaborative effort between the Arviat-based Nanisiniq history project, the University of British Columbia and Memorial University’s Abandoned Mines Project.

Its goal: to document stories from the mine and its original Inuit miners.

That will help show the mine’s impact on the region and also ensure future generations know more of the region’s past, Irniq said.

The groups recently put on a public workshop in Rankin Inlet for the community to hear about the project and share their own memories.

Irniq called the Aug. 11 workshop “a very moving experience,” as he translated accounts from elders who either worked at the mine or lived with family who did.

“Everybody recognizes that there would be no Rankin Inlet if not for the mine,” Irniq said. “The whole project has been really exciting for people to relive.”

Irniq, originally from Repulse Bay, saw many of his neighbours leave the community for Rankin Inlet in the 1960s.

Many unilingual Inuktitut speakers arrived in the region by dog-sled with no mining skills.

But within months, they had mastered English and went on to become skilled mechanics and machine operators, Irniq said.

Although Inuit nickel miners were segregated from non-Inuit staff and lived in tiny shacks, Irniq said they still feel a sense of pride about the contribution they made to the mine and the establishment of Rankin Inlet.

Today, Irniq sees many children and grandchildren of those original miners now working at the nearby Meadowbank and Meliadine projects.

And that’s affected how people view the current resurgence of mining across the North.

“A lot of people are quite supportive of the mining industry happening here,” he said. “They have a lot more say about how it happens now.”

Jordan Konek, one of the young researchers with the Nanisiniq history project, attended the Aug. 11 workshop to film footage so the Arviat-based Nanisiniq can use it in a short film on the Inuit history of the mine.

Konek has already interviewed former nickel miners at home in Arviat, but he found the interest in Rankin Inlet even higher.

“I think the reaction from the people was great,” Konek said of the workshop.

“From the knowledge of the research that we’ve done, the Inuit were treated badly, but the elders said a lot of good things about the mine.”

Konek said he learned a lot from Rankin Inlet’s elders, whose memory of the mine is key to “keeping Inuit culture alive.”

The Rankin Inlet nickel mine also has an “incredible importance” in Canadian history, said Arn Keeling, a Memorial University geographer who leads the Abandoned Mines project.

Along with his colleagues, Keeling spent his last week in Rankin Inlet digging up archived information on the mine — mostly government documents and some company records.

“The more we explore, the more people pop up to talk to,” he said.

Keeling said that about 20 of the original Inuit miners are still alive and living in the Kivalliq region today.

Some of them have helped to provide invaluable perspectives on the social, environmental and political impacts of working at the mine, he said.

As its name suggests, Keeling’s research touches on the impacts of the mine on a region and its people after the operation closed.

“We’re looking at how the government dealt with the settlement with the sudden closure of the mine,” he said. “It was a devastating event for the Inuit community there – there was no economy any more.

“This is the story of how they coped with these tremendous changes.”

But Keeling said the project, funded by ArcticNet, has generated positive public interest.

“People are really happy that their memories and experiences will live on,” he said. “What I hope is that is will make regulators and companies more sensitive to the communities they work in.”

For more information and to follow the project, visit: http://niche-canada.org/mining or http://nanisiniq.tumblr.com/.