“Music is my life, I play all the time” 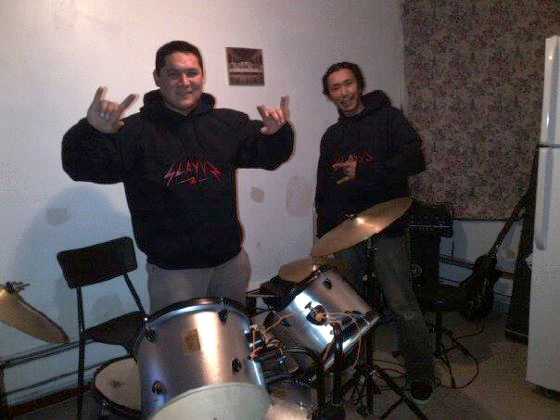 Slayvz band member Jimmy Merkosak, left, with Charlie Quasa. The band lost their equipment and jam space when Quasa’s home was destroyed in a June 13 fire. An Ontario woman has now launched an online fundraiser to help replace the lost gear. (PHOTO BY ERNEST MERKOSAK)

Charlie Quasa lost a lot of valuable belongings June 13, the day his Pond Inlet housing unit was destroyed in a fire.

Among them: his clothing, computer, art, furniture, photographs and his own bed.

But the biggest loss, said the 36-year-old, was a collection of musical instruments and equipment that belonged to Slayvz, the band Quasa has played with since 1997.

“We starting playing together 20 years ago,” said Quasa, the band’s lead singer, songwriter and guitarist. “Now they’re all charred up.”

Quasa and his 30-year-old brother lived in one half of a duplex, while a young family lived on the other side.

The evening of June 13, Quasa said a drunk person came by and was harassing him at home. Quasa left to go to his sister’s house and the next thing he heard, there was a fire in his unit.

Fortunately, no one was injured in the fire but both units in the duplex were destroyed. Police are still investigating to determine how the fire started.

Either way, Quasa figures he lost an estimated $10,000 in musical gear, including his guitar, drum set, his beloved Mansfield custom-made bass, plus amplifiers and speakers.

When Slayvz first formed in the late 1990s, the band was made up of Jimmy Merkosak, Ruben Komangapik and Roland Quasa, who has since died.

The band plays a genre of hard rock that could be described as heavy metal but at times it sounds more punk rock. Think Inuktitut Sex Pistols. You can find some of their music, and video footage of the band, on the Slayvz Facebook page.

Quasa said the songs he writes touch on his favourite things: narwhal hunting and summer days.

The band has toured and played in other Nunavut communities for a time, and recorded their first album in Iqaluit in 2002.

Komangapik now lives in the South, so the band hasn’t performed live for a while, although Quasa and Merkosak get together to jam on most weekends.

But Quasa, who is staying with his mother until new housing frees up, says he feels lost without music.

His story caught the attention of an unlikely supporter; Louise Waldie, from Niagara-on-the-Lake, Ont., who coordinates a Facebook group called Clothing for our Northern Friends. The group collects and sends clothing to northern families in need.

A relative of Quasa’s was telling Waldie about the fire and mentioned the loss of his musical gear.

“Not only did he lose his instruments, but the community lost something too,” Waldie said. “It knocks the soul out of you, if that’s what you do.”

Waldie has set up an online fundraising page to gather donations to purchase good quality, used instruments to replace the ones Quasa lost.

She’s already secured an Epiphone Les Paul guitar and a set of drums, but Waldie hopes to raise a few thousand dollars to be able to buy all the other equipment and pay to ship it to Pond Inlet.

So far the fundraiser has brought in $150.

In the meantime, Quasa said he’s visiting friends in the community who are musicians, for a chance to jam on their guitars.

You can donate to the fundraiser here.