Greenpeace says it continues to stand against Arctic oil drilling 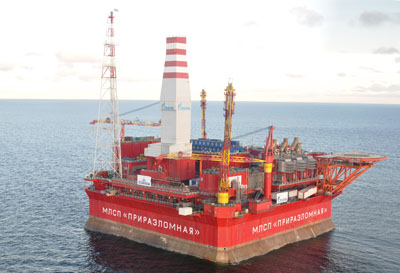 The new blend, extracted from the Pechora Sea, called ARCO, debuted on the global market April 18, the first of some 70,000 tonnes destined for an unnamed European energy company, Gazprom said in a release.

The stationary Prirazlomnoye platform is located in an oil field about 60 kilometres offshore from Russian and is considered the first Arctic-class ice-resistant oil platform in the world.

The platform was also the site of an environmental protest last September, when 28 Greenpeace activists and two freelance journalists were detained after attempting to scale the oil platform.

The group, known as the Arctic 30, were imprisoned for more than two months on charges of piracy and hooliganism, until the group was granted amnesty last December.

Greenpeace called the news of the first oil shipment “a defining moment for the Arctic and the rest of the world,” in an April 18 release, suggesting the news will attract major international oil companies to an environmentally fragile region.

“If we do not stop this Arctic oil rush we risk not only the environment, but our ability to shake off the power structures of the last century,” said Greenpeace International’s executive director Kumi Naidoo.

“Greenpeace, alongside millions of our supporters, will continue to stand against any oil company that tries to drill in the melting Arctic ocean.”

A Greenpeace briefing also suggested the shipment of heavy crude oil was significantly delayed and that the quality of oil is so poor that Gazprom struggled to find a buyer.

“The fanfare surrounding its departure looks more like a PR stunt than a credible new source of oil,” Naidoo said.

The Prirazlomnoye field is estimated to hold 72 million tons of harvestable oil. Gazprom, which began production in December, is expected to recover six million tonnes a year after 2020.