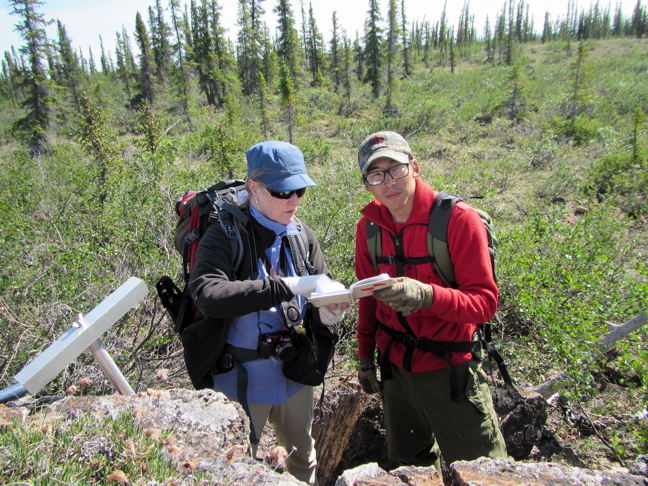 Scientist Elizabeth Turner and Adrian Kudlak, an Inuk wildlife monitor from Kugluktuk who joined the team for part of their trip. 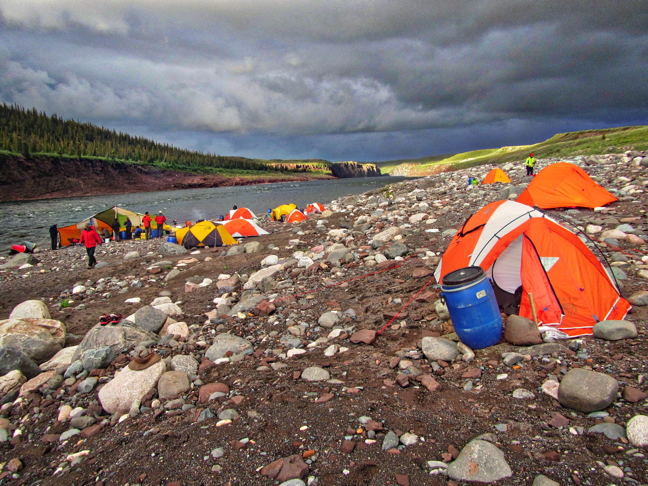 A team campsite along the route: if the theories of Rob Rainbird and Corentin Loron are correct, the Coppermine River, in Nunavut’s Kitikmeot region, might hold evidence of some of Earth’s oldest life forms. 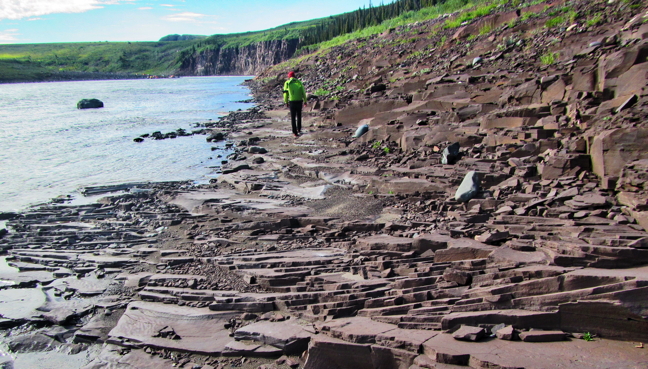 More than a billion years ago, a planet-changing volcanic eruption fossilized some of Earth’s first organisms in lava flows stretching across North America’s Arctic landmass.

Now, a team of scientists returning from a canoe trip down the Coppermine River have collected a trove of rock samples which they think might put Canada’s North on the map for preserving the remains of some of Earth’s earliest life.

“This is probably one of the biggest and one of the oldest [events] of its type,” Geological Survey of Canada geologist, Robert Rainbird told Nunatsiaq News from his home in Wakefield, Quebec, a few days after returning from the western Arctic Aug. 15.

The focal point of that volcanic explosion, the evidence of which stretches from the coasts of Alaska to Baffin Island, rests along what is now the Coppermine River in Nunavut’s Kitikmeot region.

About 1.27 billion years ago, a yet-unproven catalyst—possibly a meteor impact—triggered an apocalyptic-like volcanic explosion that destroyed what was then a “warm, shallow sea,” according to Rainbird, and home to some of Earth’s first single-celled organisms—called “eukaryotes.”

Eukaryotes are important in Earth’s natural history because they are among the first microscopic organisms to contain a nucleus, which stores genetic material, to emerge on the planet.

The “Precambrian” Eon where eukaryotes are believed to have emerged predates the dinosaurs by at least a billion years.

The Eucaryotes’ ability to divide and copy genetic material contained in a nucleus is one of the basic stepping-stones for the evolutionary process.

If the theories of Rainbird and his colleague, fossil scientist Corentin Loron, prove accurate, then the Coppermine River may hold the oldest eukaryote fossils in Canada—and possibly the world.

“We’re trying to push back in time when the first appearance of eukaryotes was,” Rainbird explained.

Rainbird’s team—eight researchers, along with four guides and a photographer—used canoes to paddle for a month down 200 kilometres of the Coppermine River, from the Dismal Lakes to Kugluktuk, collecting more than 1,000 pounds of rocks and fossil samples along the way.

The group’s mission was two-fold: to collect volcanic rocks to estimate the date and length of the lava eruption and look for signs of a possible meteor impact, and to collect samples of rock which they hope will hold remains of the eukaryote fossils.

The samples are currently en route to academic facilities across North American for analysis.

“It’s looking at a slice of Earth history that is really exceptionally well-exposed in the Coppermine River Valley,” Rainbird said.

And while scientific study of the Precambrian Eon is only in its infancy, Rainbird says it’s hard to overestimate the impact of that remote volcanic explosion in—what is now—Canada’s northern backyard, and the way it shaped the planet’s evolution.

Of course, the area as it existed back then wasn’t in the Arctic, but part of a supercontinent that rested closer to Earth’s equator.

In the moments before the lava spewed forth, Rainbird said the landscape would have been stark—a primordial terrain that would look alien by our standards, predating animals or vegetation with an atmosphere barely able to support life.

“Then you would have had all hell break lose at 1.27 billion years when you have this huge outpouring of lava,” he said.

The eruption ejected massive amounts of toxins into the atmosphere, and fundamentally changed the way life existed on the planet, with what scientists theorize as a mass-extinction scenario similar to what destroyed the dinosaurs.

“If there were big organisms on the surface of the Earth at that time, they would be all killed.”

Mineral strands inside a half-melted rock dated to the period that was found by Rainbird and a colleague in 1994, on Victoria Island, showed evidence of a massive shockwave.

The rock’s existence came tantalizingly close to suggesting a meteor could have caused the eruption.

“I had it in the back of my mind that I wanted to do that,” he said about returning to investigate the area.

But an evening at a bar talking about the rock to an outfitter friend changed all that. The man suggested he return to the area by canoe, and Rainbird pitched the trip to the Geological Survey of Canada.

The comparative cost-effectiveness of travelling by canoe instead of aircraft made the trip an easier sell, he said.

“Everything is right there, you don’t have to walk very far,” he said about the team’s travel itinerary.

On top of that, good weather over the whole month kept the team on schedule, and allowed for the easy hand-off of material along the way to rely-planes at designated check-up points.

“This was an incredible place to look at geology because it records this period of Earth’s history that is not well recorded anywhere else in Canada,” Rainbird said. 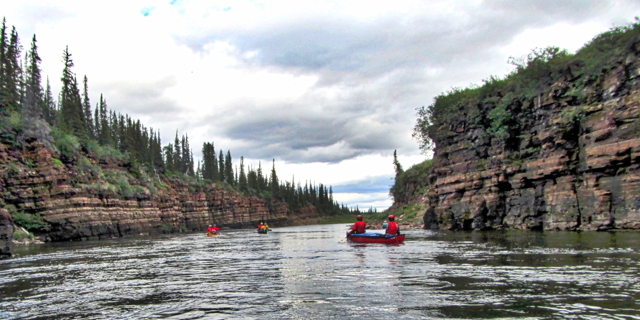 The team, sponsored by the Geological Survey of Canada, spent a month paddling down, and camping along, the Coppermine River, from Dismal Lakes to Kugluktuk, dropping off rock and fossil samples to small bush planes at designated check points along the way.