Geologists set to update land maps between Iqaluit and Pangnirtung 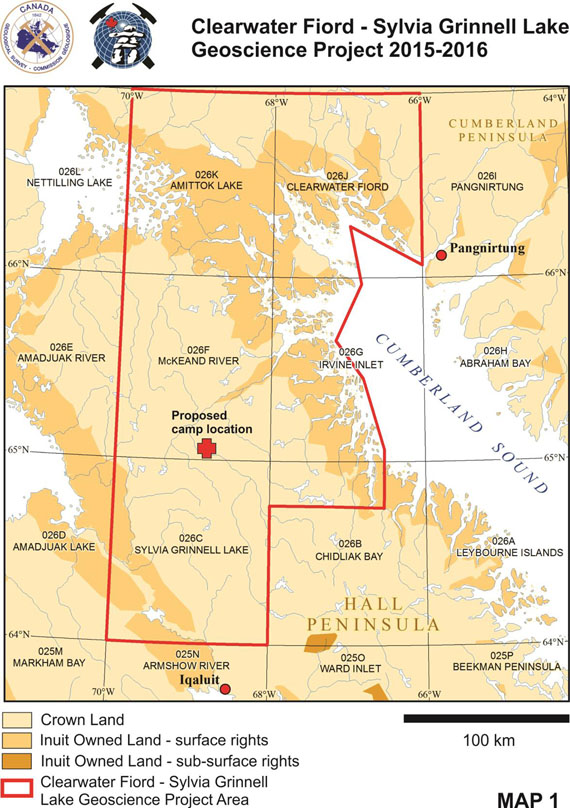 Scientists from the Geological Survey of Canada will survey lands between Iqaluit and Pangnirtung, outlined in red, for mineral resources and soapstone in unprecedented detail this summer. (IMAGE COURTESY OF GSC)

Federal government scientists will survey the geology and landscape of a large area between Iqaluit and Pangnirtung this summer.

The Geological Survey of Canada and Natural Resources Canada will share their plans and goals with the public March 25 at the Nunavut Research Institute in Iqaluit.

Surveyors will cover an area stretching from Clearwater Fiord, just west of Pangnirtung, to Nettilling Lake in the west, and south to Sylvia Grinnell Lake.

Led by the Geological Survey of Canada, the survey’s goal is produce new and updated geological maps and detailed information about the land, which may help identify mineral resources as well as carving stone.

“The research will also help document the geological history of the land,” the GSC stated in a recent FAQ document.

“Results from our work will greatly enhance Nunavut’s understanding of the land, in order to better protect it,” the agency stated.

A group of 16 geologists and support staff will work out of Iqaluit, June 22 until July 6, and a temporary camp on the McKeand River, more than 150 kilometres north of Iqaluit, from July 6 to Aug. 22.

A helicopter will take geologists out onto the land daily, where they will take rock samples by hand and survey the landscape. The GSC will also use satellite imagery to make broader observations from space.

“All maps and information will be made publicly available and we look forward to reporting back on a regular basis,” the GSC stated.

The McKeand River survey camp will take on supplies of fuel and water. The group will dispose of sewage on site, and burn solid waste in drums equipped with a portable incinerator.

The research team will hear Iqaluit residents’ opinions about waste disposal at the public consultation meeting.

The Clearwater Fiord-Sylvia Grinnell Lake Geoscience Project is part of broader federal program “to create modern regional scale geological maps of energy and minerals” for Northern Canada, known as the GEM (geo-mapping for energy and minerals) program, the GSC said.

The GEM program “is designed to provide a more comprehensive mapping of Northern geology,” and “model the environments associated with petroleum and mineral deposits.”

The survey will also identify soapstone for carving.

Researchers will produce maps in English and Inuktitut, which will be available in Iqaluit and Pangnirtung.

GSC and Natural Resources Canada will host a community consultation on the project at the Nunavut Research Institute in Iqaluit, Wednesday, March 25 at 7 p.m.

Contact Madeleine Redfern of Ajungi Group at mredfern@ajungi.com for information.

Researchers said they will host similar community meetings in Pangnirtung.