Last time levels of CO2 were so high, camels roamed the Arctic 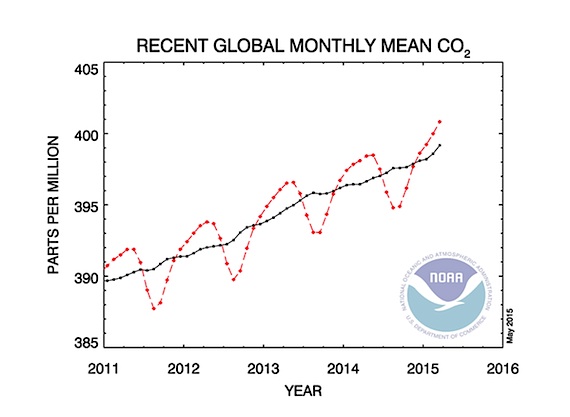 This graph shows how carbon dioxide in the atmosphere has risen to high levels. (GRAPH COURTESY OF NOAA) 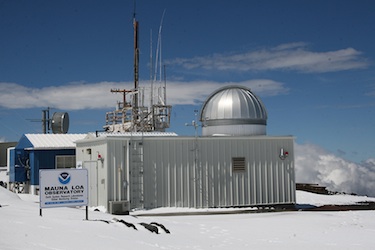 Atmospheric testing has taken place at the Mauna Loa observatory in Hawaii for more than 50 years. (HANDOUT PHOTO)

For the first time since the National Oceanic and Atmospheric Administration began tracking carbon dioxide in the global atmosphere, the monthly global average concentration of this greenhouse gas has surpassed 400 parts per million — in March 2015 — according to NOAA’s latest results.

The parts-per-million or ppm measurement of carbon dioxide provides a way of measuring traces of this gas in the atmosphere.

“Reaching 400 parts per million as a global average is a significant milestone,” said Pieter Tans, lead scientist of NOAA’s Global Greenhouse Gas Reference Network, on May 6. “We first reported 400 ppm when all of our Arctic sites reached that value in the spring of 2012.

Scientists estimate that the last time that carbon dioxide levels remained as high as 400 ppm was probably between 3.2 million and five million years ago.

Then, the Arctic was as much as 14 C to 22 C warmer than today, trees such as larch, birch, alder and cedar covered the land, and giant beavers and eight-foot-tall camels roamed the High Arctic.

“It was only a matter of time that we would average 400 parts per million globally,” Tans said in a NOAA release.

In 2013 the record at NOAA’s Mauna Loa Observatory in Hawaii first crossed the 400 ppm threshold.

Carbon dioxide, added to the atmosphere and oceans, remains for thousands of years making it increasingly difficult to avoid even more substantial climate change, NOAA said.

James Butler, director of NOAA’s Global Monitoring Division, said in the release that it would be difficult to reverse rising greenhouse gases which are driving increased atmospheric temperatures.

“Elimination of about 80 percent of fossil fuel emissions would essentially stop the rise in carbon dioxide in the atmosphere but concentrations of carbon dioxide would not start decreasing until even further reductions are made and then it would only do so slowly.”

NOAA and partner scientists collect air samples in flasks while standing on cargo ship decks, on the shores of remote islands and at other locations around the world for analysis at NOAA’s Earth System Research Laboratory in Boulder, Colorado.