New design is “as distinct as Nunavut is itself” 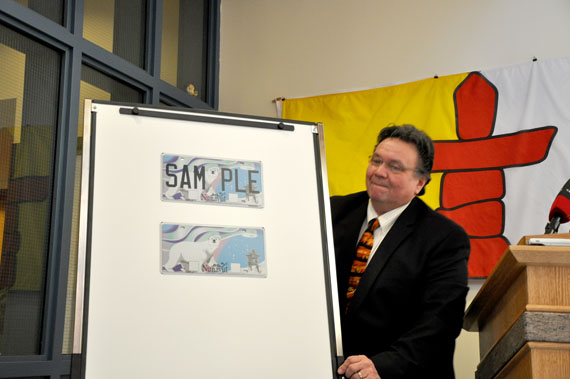 Economic Development and Transport Minister Peter Taptuna launched the new design at the legislature March 6, calling it “as distinct as Nunavut is itself.” (PHOTO BY SARAH ROGERS)

Nunavummiut will have to say goodbye to the territory’s iconic polar bear license plate – but not to the polar bear itself.

Economic Development and Transport Minister Peter Taptuna launched the new design at the legislature, calling it “as distinct as Nunavut is itself.”

“This license plate is like a window into Nunavut,” Taptuna said. “This will show the world that we are our own territory.”

The winning design features a polar bear and inuksuit under a night sky filled with three streams of northern lights — one for each of the territory’s three regions.

The plate also features 25 stars for each of Nunavut’s municipalities.

The new plate goes into circulation in July to replace the polar bear-shaped plate that Nunavut has used under license from the Northwest Territories since it become its own territory in 1999.

The NWT recently made changes to its plate and the design was longer available for license in Nunavut.

Taptuna said submissions touched on all kinds of Nunavut’s icons — owls, igloos, caribou and fish — and came from designers of all different ages, from school-aged artists to elders.

Taptuna handed out commemorative plates to members of Nunavut’s legislative assembly at the unveiling March 6.

But drivers won’t see the new plates across the territory until the first 10,000 enter circulation in the summer. Nunavummiut will be issued the new plate when they update their vehicle registration or purchase a new vehicle after July 2012. 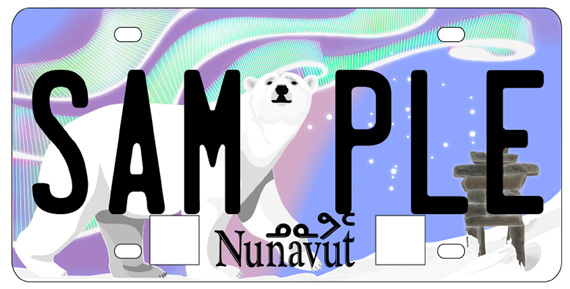