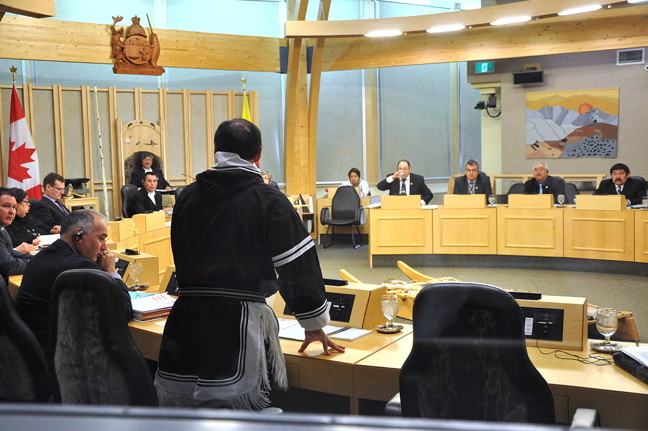 “My name is Paul and I’m an alcoholic.” So began Paul Okalik’s minister’s statement in the Nunavut legislature Mar. 3, just before he resigned his cabinet posts to show his opposition to a beer and wine store in Iqaluit, something his constituents voted in favour of in April 2015. (PHOTO BY SARAH ROGERS)

Nunavut’s health and justice minister, Iqaluit-Sinaa MLA Paul Okalik, resigned from cabinet March 3 over his opposition to the government’s plan to open a beer and wine store in his home community of Iqaluit.

Given the lack of addictions treatment in Nunavut, the former premier said he cannot support the position of fellow cabinet ministers, who have expressed support for the pilot project. Okalik said he will stay on as MLA for Iqaluit-Sinaa.

Ten months ago, more than 1,100 Iqalungmiut voted in a plebiscite in favour of opening a beer and wine store in the city.

A few months later, cabinet approved new regulations under Nunavut’s Liquor Act that would allow for a store to sell alcohol, a pilot project the GN indicated it planned to launch.

“To ram a beer and wine store in light of all the problems we face with alcohol was something I could not support,” said Okalik outside the legislative assembly, visibly shaken.

“We need to be ready to support those that do have addictions to alcohol.”

Premier Peter Taptuna, who is out of town attending a first ministers meeting in Vancouver, B.C., issued a news release March 3 saying he accepts Okalik’s resignation and that on Monday, March 7, he will reassign Okalik’s cabinet portfolios.

“I want to thank Mr. Okalik for his dedicated service to cabinet on behalf of Nunavummiut and as a member of the Executive Council,” Taptuna said in the release.

The surprise announcement came during oral question period at the legislature Thursday afternoon when Okalik rose to say “my name is Paul and I’m an alcoholic.”

Okalik says he has been sober now for 25 years, an experience he said informed his position on alcohol sales in the territory.

“When [addicts] come out of treatment, they’re going into the same environment,” he said. “They need the day to day support to go back to that routine. And we don’t have that. We don’t even have a facility for treatment.”

Okalik’s resignation answered a lingering question put to Finance Minister Keith Peterson March 2, when Iqaluit-Niaqunnguu MLA Pat Angnakak asked why the beer and wine store had yet to open.

“All I can say is the matter is still under consideration by cabinet,” Peterson said.

“[It] would be very difficult for me to point specifically at one group or individuals [who oppose the project.]”

Peterson made clear that the government recognizes the plebiscite result and believes that easier access to alcohol would help ward off bootlegging and binge-drinking in Iqaluit.

“We have heard all the pros and cons,” Peterson said.

“There are people who are quite concerned, going back 40 or 50 years maybe, that alcohol has been bad for Nunavut and causes a lot of social problems.

“We believe, through the task force and all our consultations, opening a beer and wine store would offset binge drinking and would reduce profits to bootleggers. There have been success stories from northern Quebec.”

In the fall sitting of the legislature, Peterson said various GN departments wanted time to put programs in place, such as alcohol education and addiction support, before it moved ahead with the beer and wine store project.

A Government of Nunavut task force and a series of public consultations on alcohol sales have cost the GN $1.3 million, the finance department said.