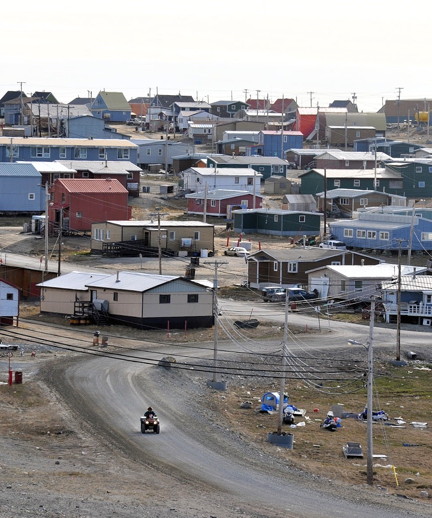 The Hudson Bay Neighbours Regional Roundtable set up two working groups to take a fresh look at plans to connect Nunavut’s Kivalliq region with Manitoba’s road and hydropower grid. Rankin Inlet, pictured, as well as the communities of Whale Cove and Arviat would be the first to benefit. (FILE PHOTO)

Long-standing hopes to create road and hydropower links between Nunavut’s Kivalliq region and Manitoba took a step closer to reality this fall at a meeting of Hudson Bay regional governments, according to George Kuksuk, Nunavut’s minister of economic development and transportation.

Kuksuk’s department represented the Government of Nunavut at the most recent meeting of the Hudson Bay Neighbours Regional Roundtable in Baker Lake, Sept. 18, the minister said in the Nunavut legislature Oct. 30.

His department agreed to demands by mayors of the Kivalliq region to set up a “working group” to study the feasibility of a road link between the Kivalliq’s southern-most communities and Churchill, Manitoba.

The roundtable’s proposed road would extend from Churchill to Arviat, Whale Cove and Rankin Inlet.

Kuksuk’s department also agreed to establish a committee to consider how the region could tap into Manitoba Hydro’s power grid, Kuksuk said.

The two working groups include representatives from the Government of Manitoba, the GN nd Inuit organizations in the region, such as the Kivalliq Inuit Association, Kuksuk told Nunatsiaq News, Oct. 31.

As minister responsible for economic development and transportation, Kuksuk said he is involved primarily with proposals to build a road link between Manitoba and the Kivalliq, which includes his constituency of Arviat North-Whale Cove.

“There’s a whole whack of things they’re working on, like the cost of building a winter road only, and what it would cost to build an all-weather road,” he said.

The governments of Manitoba and Nunavut have studied possibilities for all-weather and winter roads in the western Hudson Bay regions in the past, complete with possible routes and cost estimates.

This time, the roundtable’s two committees will take a broader look at other issues such as possible impacts of a road and hydro link on the environment, particularly on caribou migration routes, Kuksuk said.

The working group on transportation will give up-to-date estimates on the costs of a winter road versus an all-weather road, taking environmental factors into account.

The hydro-line group will research the possibility of a permanent power link with Manitoba Hydro.

Both projects call for huge investments however the pay-off for Kivallirmiut could be far-reaching.

Tom Sammurtok, Nunavut’s minister of community and government services, estimates that a hydro link with Manitoba could bring power rates down to less than one-fifth of current charges.

Electricity charges typically range from 70 to 80 cents per kW-hour in the Kivalliq region, the minister said.

“If we brought the hydro from Manitoba, it would likely go down to about 13 cents a kW-hour. So there’s a big difference there,” Sammurtok told Nunatsiaq News.

The road link would have similar effects on shipping costs, by offering a less costly alternative to air freight and decreasing reliance on the short sealift season.

A road would also decrease construction costs and allow the government to carry out infrastructure projects more quickly, with less risk of delay, Sammurtok said.

“By the time sealift is done, we’re almost already into winter, resulting in delays,” the minister said.

“Some contractors will wait until the following spring to start construction, whereas if we had this road, and even an ice road, construction material could be brought up from the South to their northern destination over the winter, and construction can start as soon as the weather permits,” Sammurtok said.

The minister attended the Baker Lake meeting as a delegate, representing his constituency of Rankin Inlet North-Chesterfield Inlet. He co-chaired an earlier meeting of the Hudson Bay Neighbours Regional Roundtable in April this year, which took place in Churchill.

“The mayors of Kivalliq and northern Manitoba are the big supporters of this,” Sammurtok said of the power and road links. “So I think it’s going to be kept alive for a long time until something actually starts to happen.”

The two working groups will present their findings at the next roundtable meeting in the spring of 2015, the ministers said, which will take place in Winnipeg.

He said the governments of Manitoba and Nunavut would not be able to cover the cost of these hydro and transportation links so once they get cost estimates, officials will approach Ottawa to contribute.

The Hudson Bay Neighbours Regional Roundtable typically convenes after the Kivalliq Mayors’ Forum. The call to create the two working groups came largely from the region’s seven mayors, who had laid out their demands in past meetings.

The roundtable brings together the region’s seven mayors with representatives from the city of Churchill, the Government of Manitoba and the GN, to discuss shared concerns on matters of health care, business and economic development, and transportation.