“We must talk openly about tobacco” 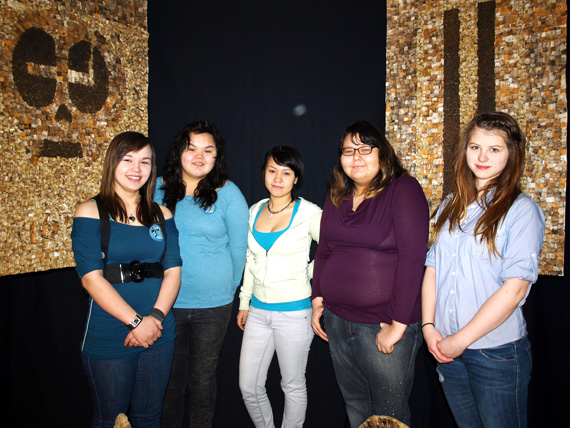 To bring attention to the dangers of tobacco use, 15 students from Iqaluit’s Inuksuk High School created sculptures out of thousands of discarded cigarette butts. (PHOTO BY DEAN MORRISON) 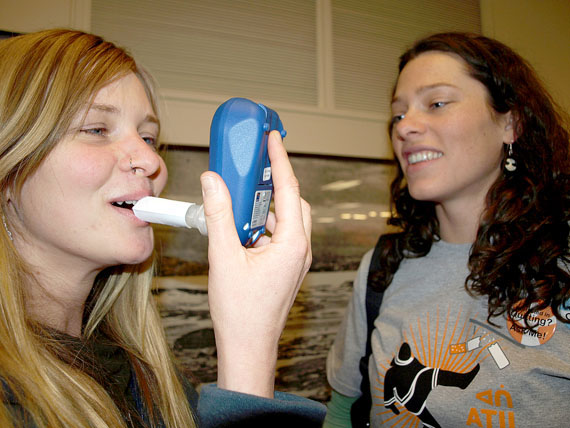 Jenn Sharman, left, a non-smoker, tests her lungs for the presence of carbon monoxide with Natasha Stephen, a public health nurse, at an educational event held Jan. 21 in Inuksuk High School. Sharman registered only one part per million – smokers will register anywhere between 17 ppm and 59 ppm, depending on how frequently they smoke. (PHOTO BY DEAN MORRISON)

The Government of Nunavut kicked off an anti-smoking campaign called “Tobacco has no place here” with a country food feast at Iqaluit’s Inuksuk High School Jan. 21.

At the same time, communities across Nunavut held similar events to coincide with National Non-Smoking Awareness Week, which ran from Jan.15 to Jan. 21.

“Nunavut’s tobacco use is more than twice as high as the rest of Canada,” Nunavut Health Minister Keith Peterson said at the event. “We must talk openly about tobacco and the harmful health effects that smoking has on people.”

This is the first year in a five-year GN action plan aimed at bringing down smoking rates in Nunavut.

In the Baffin region, research shows more than 80 per cent of pregnant women smoke and some children start to smoke as early as age eight.

To bring attention to the dangers of tobacco use, 15 students from Iqaluit’s Inuksuk High School, working with local artist Danny Osborne, created sculptures out of discarded cigarette butts.

The artwork consisted of two canvas wall hangings and a baby’s crib, each intricately decorated with more than 8,000 cigarette butts.

It took the students only two hours to collect the 8,000 discarded cigarette butts.

“We collected the butts from constructions sites and from people’s homes,” said Keisha Alurut, one of the student artists.

Organizers put this art work on display at the high school during a country food feast sponsored by the campaign.

Alurut, 15, said this campaign is significant for her because she has been smoking since age 10 and is now ready to quit.

“I had my first smoke when I was five and my mom didn’t know I smoked until last year,” Alurut said. “I have been trying to quit for the past three months.”

“What we have seen from the statistics is that tobacco use is one of the number one killers of Nunavummiut,” Kronstal said.

The high school’s foyer featured various tables, each offering information on health hazards associated with smoking or where people can get help if they want to quit.

One of the key messages of the campaign is that tobacco related illnesses are preventable and affect far too many communities in Nunavut, Kronstal said.