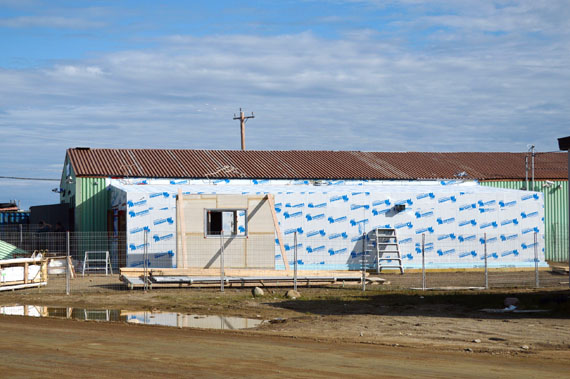 Renovation work continues at the GN liquor warehouse in Iqaluit, where a beer and wine store will open, likely this year some time. (PHOTO BY STEVE DUCHARME)

The possibility of a residential addictions treatment centre for Nunavut is back on the table, with the release of a new government request for proposals that seeks someone to research options for offering such a service.

According to an RFP issued July 7, the Government of Nunavut wants to contract a consultant to develop options for addictions and trauma treatment for Nunavummiut.

One of the options in the study is to explore the feasibility of a residential addictions and trauma treatment centre within the territory—something that hasn’t existed within Nunavut since 1998.

Since then, residential treatment has been available only at centres located outside the territory.

“It is key that the learnings from previous experiences delivering addictions treatment programming in Nunavut be considered,” the GN said in its tender.

Any options presenting in the study should be grounded in Inuit culture, support continued recovery and foster healing, the GN said.

Along with suffering the highest rates of suicide in the country, the Chief Coroner of Nunavut reports that 23 per cent of all premature deaths in the territory between 1999 and 2007 involved binge drinking.

And 58 per cent of Nunavummiut who died by suicide between 2005 and 2010 had problematic levels of cannabis use in the six months prior to death.

And 30 per cent of all homicides are associated with substance abuse, the GN said, while 95 per cent of inmates in Nunavut’s Baffin Correctional Centre reported having alcohol or drug-related dependence.

While no physical treatment centre exists in the territory, the GN currently runs a mobile addictions treatment program in Cambridge Bay, and the GN and other community-based organizations, like the Ilisaqsivik Society in Clyde River, also provide limited counseling services.

The proposed study on addictions takes on new significance ahead of the opening of the territory’s first local beer and wine store in Iqaluit, after residents voted overwhelming in favour of the pilot-project during a city-wide plebiscite in 2015.

The store has yet to open, but Iqaluit-Sinaa MLA Paul Okalik resigned from his cabinet position over the matter in 2016 and has engaged in contentious debate with the minister in charge of the project, Keith Peterson, ever since.

“To ram a beer and wine store in light of all the problems we face with alcohol was something I could not support,” Okalik said when he resigned from cabinet in March 2016.

“We need to be ready to support those that do have addictions to alcohol.”

Baffin mayors, during a forum last year, passed a resolution requesting that an addictions centre be available ahead of the beer and wine store opening its doors.

The tender requesting the study will remain open until Aug. 10 and can be accessed on the GN’s procurement page here.

The Department of Finance, which is responsible for the management of Iqaluit’s beer and wine store, told Nunatsiaq News July 31 that an opening date for the store has yet to be decided.