“In their make-up and cultural attributes, all governments should reflect the people they serve” 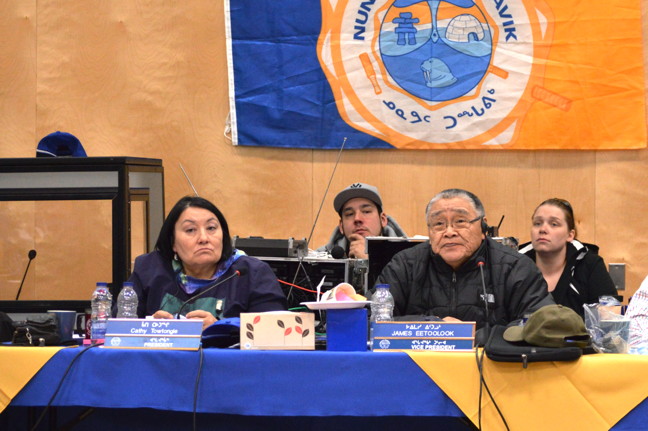 Nunavut Tunngavik Inc. President Cathy Towtongie seen here on the left with NTI Vice President James Eetoolook at a board meeting at Nanook School in Apex on Oct. 19, 2015, says she supports Directive 518, which allows the GN to restrict certain job competitions to Nunavut Inuit only. (PHOTO BY STEVE DUCHARME)

Nunavut Tunngavik Inc. fully supports the Government of Nunavut in its adoption of Directive 518: Restricted Competitions under the Human Resources Manual as it relates to competitions restricted to Nunavut Inuit.

Article 23 of the Nunavut Land Claims Agreement commits the federal and Nunavut governments to achieving work forces that fully reflect the Inuit proportion of Nunavut’s population — approximately 85 per cent.

The Nunavut agreement has constitutional status and protection, and prevails against any other conflicting laws. The Supreme Court of Canada has said that treaties with Indigenous peoples, including land claims agreements, have to be implemented with due diligence and in ways that reflect the honour of the Crown. Implementing Article 23 is not an option and it is not a luxury. It is a far-reaching and enduring obligation at the heart of Nunavut’s history and future.

Despite the constitutional and political importance of implementing Article 23, both the federal and Nunavut government workforces continue to fall far short of being fully representative of Inuit in every occupation and level.

This is simply not good enough. It is clear that there is still much work to be done to fully achieve the vision of Nunavut. New tools need to be created and pursued. Existing tools, such as the priority hiring policy, have to be adapted and more effectively applied.

With the renewed energy and attention garnered as a result of NTI’s settlement agreement, NTI expects to see more proactive measures adopted by the GN to aggressively achieve a workforce fully representative of Inuit.

NTI welcomes this new measure in the area of staffing and recruitment and expects to see equally important measures in the areas of training opportunities and pre-employment initiatives geared specifically to Inuit.

In their make-up and cultural attributes, all governments should reflect the people they serve. In Nunavut’s case, this is a matter of constitutional good faith as well as sound democratic principle and economic justice that will create stronger and healthier Inuit families and communities.