Government of Nunavut needs to step up training of Inuit: NTI 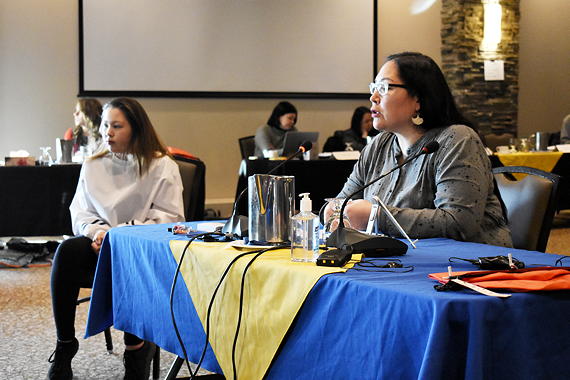 “If we are going to get more Inuit staff, there needs to be more training,” Kotierk said on Tuesday, Oct. 23, during her president’s report at NTI’s annual general meeting in Iqaluit.

The document—the largest of its kind—is the product of more than three years of research and surveys with many Inuit involved in the process, Kotierk said in an interview.

Kotierk said that such a report was supposed to be done within six months after the Nunavut Agreement was signed in 1993, with the intent of informing how Inuit employment plans could be developed for government—municipal, territorial and federal.

First, she wants to see Nunavut get more Inuit and Inuktut-speaking teachers working.

The other priority for Kotierk and NTI will be advocating for the GN to convert long-term Inuit casual staff to indeterminate roles.

The report found that 92 per cent of all Inuit non-permanent employees want permanent work.

“There are so many Inuit who are casual employees at the GN, who have been long-time casual employees. They don’t have a permanent position but they have been doing public service work for a long time. From what I gather from looking through the analysis, many of these Inuit in these positions would actually prefer to have an indeterminate position,” Kotierk said.

“I think what needs to happen is there needs to be a push for the government to encourage Inuit and let Inuit know about the training opportunities that are available.”

One key point of the analysis, Kotierk said, is that Inuit want to work for the GN and they want to participate in training in order to be promoted to higher positions.

While 85 per cent of the population of Nunavut is Inuit, Inuit account for only 50 per cent of GN employees and 40 per cent of federal government employees in the territory, according to the report.

Across both the federal and territorial governments, Inuit employees tend to work in administrative positions, with fewer Inuit in professional, supervisory or executive roles.

Inuit usually take job training when their supervisors encourage them to do so, Kotierk said.

“Supervisors need to create the workplace environment that encourages Inuit to take training so that they can better their skill-set and be able to take on more responsibility,” she said.

“The government needs to provide training opportunities…. It needs to be available in Inuktut, and it needs to have some barriers addressed, like childcare.”

More than one-quarter of Inuit GN employees identified childcare availability as one of the top three solutions for increasing Inuit GN employment, the report states.

Additionally, more than half the Inuit polled who were not employed by the GN indicated that they would be interested in working for the GN.

It also found that even more Inuit would want to be employed at the GN if it was more supportive of Inuit culture. Kotierk said the most important example of this is allowing Inuktut to be the working language.

“Many Inuit speak Inuktut, but it is not a requirement in the workplace. Having a space where it is encouraged and welcomed, I think would make people feel more comfortable to work there,” Kotierk said.