Greenland pushing ahead with oil and gas development 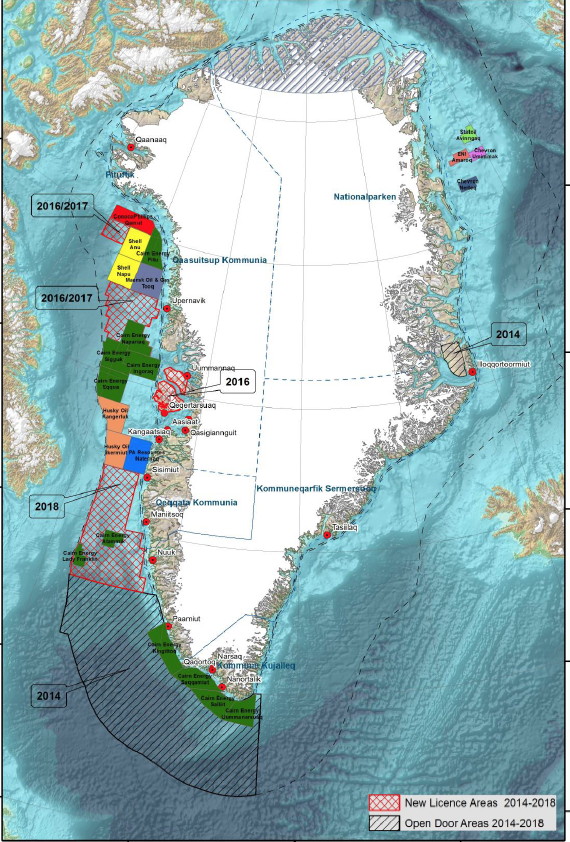 This graphic, taken from Greenland’s oil and mineral strategy for 2014-2018, shows solid areas where companies such as Husky Oil, ConocoPhillips, Shell and Cairn Energy are currently exploring and lined areas where Greenland plans to grant exploration licenses in the next four years. 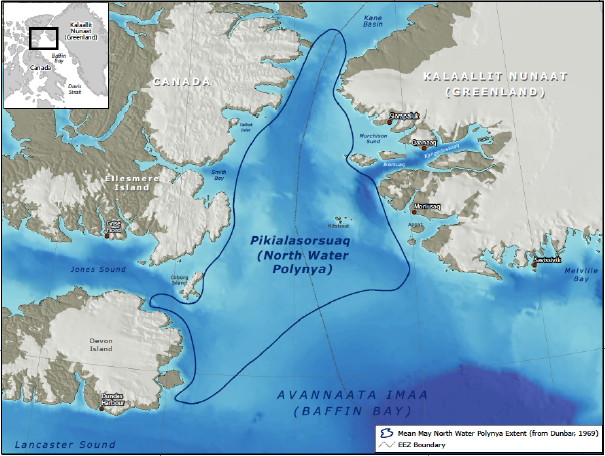 This graphic, taken from a recent opinion poll report commissioned by the Inuit Circumpolar Council-Greenland, shows the location of the biologically diverse North Water Polynya which may also contain underwater oil and gas reserves. Nearly half of Greenlanders polled (49 per cent) say oil and gas drilling should be limited or prohibited there. 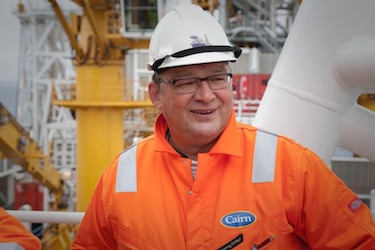 Greenland’s ex-premier Kuupik Kleist, visits an oil drilling rig off Greenland in 2011. This past February, the government of his successor, Alequa Hammond, pledged that it will forge ahead with offshore oil and gas development. (FILE PHOTO)

When it comes to offshore oil and gas development, Greenlanders remain utterly conflicted over the pace of development, how safe it is, who is benefiting and how it will affect the waters they rely on for their livelihood, says a recent public opinion poll.

But the Government of Greenland plans to forge ahead anyway — especially in the waters between Greenland and Baffin Island — convinced that oil and gas development are integral to sustaining Greenland’s future economy.

In February, the Government of Greenland released its oil and mineral strategy for 2014-2018.

“The Government of Greenland’s goal with the mineral resources sector is clear,” the strategy says.

“It wants to promote prosperity and welfare by creating new income and employment opportunities in the area of mineral resources activities. More specifically, the Government of Greenland’s long-term goal is to further the chances of making a commercially viable oil find.”

The strategy compares the corporate tax and royalty rates imposed by “benchmark” oil-producing countries, which excludes countries in the Middle East. These are critical means by which governments benefit financially from private sector investment in resource development.

Of the 12 jurisdictions mentioned, Canada has the lowest corporate tax rate at 15 per cent. All others on the list, except for Kazakhstan at 20 per cent, have corporate tax rates of 25 per cent or higher including Denmark, Norway, Argentina and the UK.

Greenland’s strategy lists five areas on which it plans to focus oil exploration licensing in the next four years and on that list are Baffin Bay and Davis Strait, the two bodies of water that separate Greenland from Baffin Island.

Those marine areas have been in the news a lot lately.

Right now, no companies are drilling for oil and gas offshore of Nunavut and the Nunavut Marine Council wants to keep it that way for now.

The NMC recently sent a letter to the National Energy Board asking that the board postpone any related decisions on offshore seismic testing or oil and gas development until after AANDC completes its strategic environmental assessment.

Offshore oil and gas exploration in the Arctic is licensed and controlled by Ottawa.

At least seven Baffin communities, along with other Baffin organizations, currently oppose seismic testing in those waters — testing that identifies potential oil and gas reserves.

While some Greenlanders support drilling for oil and gas off their shores, they remain divided over its benefits and potential risks.

In a telephone poll of 721 Greenlanders commissioned by Oceans North for the Inuit Circumpolar Council-Greenland in the fall of 2013, 65 per cent of respondents consider oil spills the biggest threat to Greenland waters — well above climate change at 21 per cent.

And yet, half of those polled say they support the current pace of oil and gas drilling off the Greenland coast or believe it should be speeded up.

That’s in contrast to 40 per cent who say it should be suspended, scaled back or permanently halted. More than half — 54 per cent — say drilling for offshore oil is risky.

(Oceans North and ICC Greenland have teamed up before. In 2012, they commissioned a third-party technical review which was highly critical of the government’s handling of Cairn Energy’s offshore oil exploration drilling program in Western Greenland.)

In reference to the recent Greenland opinion poll, the majority of respondents believe the Greenland government is doing an inadequate or poor job of informing the public, ensuring safeguards are in place and consulting with local communities about offshore oil and gas development.

When it comes to Greenland’s future, those polled ranked oil and gas development the lowest in a list of seven important economic sectors with tourism and seafood products ranking the highest.

Pollsters also asked Greenlanders about the North Water Polynya between Northwest Greenland and Nunavut’s Ellesmere and Devon islands — “one of the most biologically productive marine ecosystems in the Arctic,” but also a potential hot spot for oil and gas.

Roughly one-third say it should be open for oil and gas exploration, roughly one third call for a protected area and 14 per cent say drilling should be prohibited.

In its concluding observations, the Oceans North poll notes a, “strong consensus that renewable resources are critical to Greenland’s economic future,” but also that, “offshore drilling seen as risky, which drives a clear public desire for increased transparency and strong protection for the marine environment.”

The poll has a margin of error of plus or minus 3.62 per cent, 19 times out of 20. All respondents were over 17, roughly equal between male and female and the largest age group represented was between 17 and 29 (just under one third of all those polled).

You can read a copy of Greenland’s mineral and oil strategy here.