Greenland vote likely headed for a squeaker this March 12

Poll suggests Siumut, Inuit Ataqatigiit, are tied for the lead 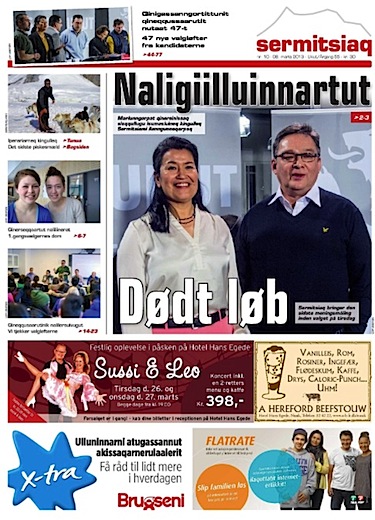 It’s a “dead heat,” says the headline of the latest edition of the Greenlandic newspaper Sermitsiaq AG, which shows Aleqa Hammond, the leader of the Siumut party, and Kuupik Kleist, the leader of the Inuit Ataqatigiit party, on its cover.

“Get off your couch and vote” March 12, Greenland’s major newspaper, Sermitsiaq AG, has counseled its readers.

That’s because recent opinion polls indicate the March 12 island-wide election, widely viewed as a referendum on how to pursue resource development, is likely to be a squeaker.

To elect new members for its Home Rule parliament, Greenland’s 40,000 voters will chose from among candidates representing five parties: the ruling Inuit Ataqatigiit, as well as Siumut, Demokraterne, Atassut, Partii Inuit and the Kattusseqatigiit Partiiat.

Early polls suggested the leftist, pro-independence IA party, headed by Premier Kuupik Kleist, could win more than 40 per cent of the vote, enough to keep the IA in power.

But new polls show the social democratic Siumut party, which, until the last election in 2009, led all governments since the beginning of Home Rule in 1979, is now running close behind or even ahead of the IA.

This means Siumut’s leader, Aleqa Hammond, may become Greenland’s new premier — and the first woman to lead Greenland — after the votes are counted March 12.

First elected to Greenland’s parliament in 2005, she served as minister of finance and foreign affairs until the Siumut party lost to the IA in 2009 and Kleist became Greenland’s premier.

Under Greenland’s system of proportional representation, each party will end up with a share of seats that roughly corresponds to its share of the popular vote.

This means victory by Hammond would likely lead to a coalition government, formed after all parties negotiate who will support who and under what conditions.

A March 8 poll, conducted by Sermitsiaq on Facebook, claims IA sits at 39.2 per cent support with Siumut with 35.8 per cent.

A poll by Greenland’s KNR broadcaster of SMS messages received during the last televised debate showed 52.6 per cent of the vote going to the Siumut and Partii Inuit.

Hammond will, along with Partii Inuit, have the majority to form a government, KNR said.

Another poll by HS Analysis conducted for Sermitsiaq shows the two leading parties locked in a “dead heat,” with the IA ending up with 13 seats in the 31-seat parliament, one less than in 2009.

“We dare to predict that the election will be extremely close,” says Sermitsiaq.

For the Siumut party to gain power, support from a new party called Partii Inuit, expected to receive about seven per cent, will have to go to Hammond, the newspaper also suggests.

Sermitsiaq says it’s doubtful that the IA, with support from only the Demokratiit party, which is expected to get about 10 per cent of the vote, can muster a majority.

Among the key issues during the current election campaign: uranium mining and a new act that makes it easier to open large mines, with Siumut calling for more taxes on mines, more restrictions on mining and a continued ban on uranium mining.

Kleist, 54, a former social worker, journalism professor and singer, who has led the IA since 2007, has maintained Greenland has the right to pursue industrial development on its own terms.

That’s because such development could offer its citizens more access to jobs, education, health care and independence from Denmark, he has said in the past.

But Hammond has said people don’t feel they’re part of the decision-making process of big scale projects and mining.

“Where is the voice of the people?” Hammond told Reuters in a recent interview. 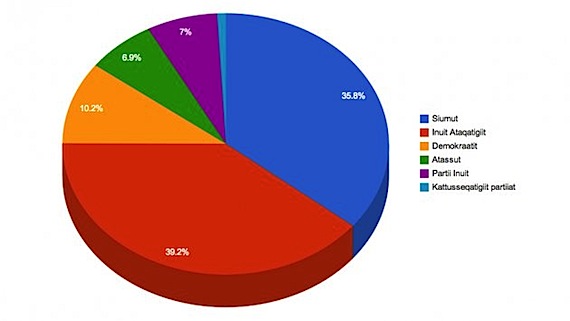 This image from Greenland’s Sermitsiaq AG newspaper shows how a recent Facebook poll forecasts the break-down of the March 12 vote. The Inuit Ataqatigiit is in red with 39.2 per cent of the vote, Siumut in blue with 35.8, Demokraterne with 10.2 per cent , Atassut in green with 6.9 per cent and Partii Inuit in purple with seven per cent.