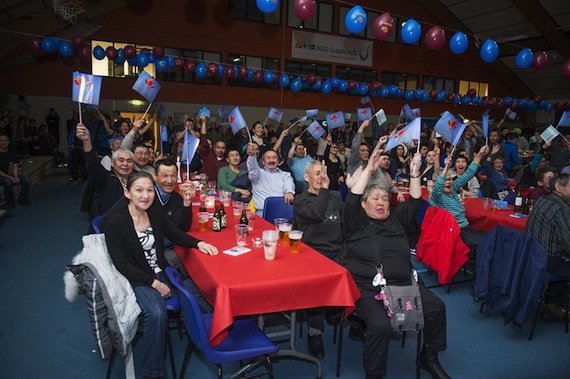 Siumut party supporters March 12 at a hall in Nuuk wave their party’s flags and cheer as the results showing the Siumut winning start to pour in. (PHOTO BY LEIFF JOSEFSEN/ SERMITSIAQ AG)

Greenland’s new premier will be Aleqa Hammond, leader of the Siumut party, according to results of the March 12 election in Greenland.

As the results were announced in the Nuuk hall where 300 supporters of the Siumut party had gathered, everyone waved party flags and cheered wildly, Sermitsiaq reported.

On March 13, Hammond will start negotiations on forming a coalition government with the other parties. That will determine who will support who and under what conditions.

“We are in no hurry to form a coalition,” Hammond said in a March 13 afternoon news conference.” We willspend the rest of the week to hear what the parties have on their minds, and how they see cooperation with Siumut. It is important to take it easy, when looking for a partner — or two.”

Early polls had suggested the leftist, pro-independence IA party could win more than 40 per cent of the vote, enough to keep the party in power.

But new polls showed the social democratic Siumut party, which, until the last election in 2009, led all governments since the beginning of Home Rule in 1979, running close behind or even ahead of the IA.

First elected to Greenland’s parliament in 2005, Hammond served as minister of finance and foreign affairs until the Siumut party lost to the IA in 2009 and Kleist became Greenland’s premier.

Nunavut Premier Eva Aariak congratulated Hammond and said she looked forward “to working together on areas of common interest.”

“Becoming the first woman to lead Kalaallit Nunaat will be a historic achievement for Greenland and I wish her success in forming a new government,” Aariak said. “Aleqa Hammond is very familiar with Nunavut and even attended Nunavut Arctic College in Iqaluit as a student.”