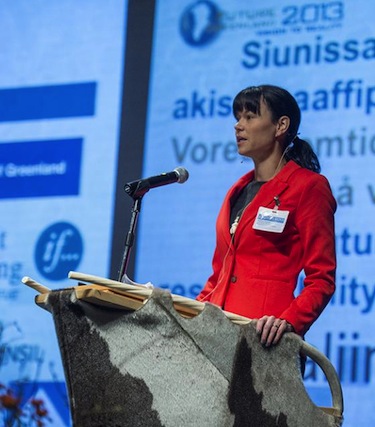 A prominent Greenlandic politician has decided to resign from Greenland’s parliament to head the 2016 Arctic Winter Games in Greenland.

Maliina Abelsen, 37, minister of finance under the former Inuit Ataqatigiit government, will takes up her new position as director of the games Sept. 1.

“I look forward to working with a project that aims to create unity and positive energy in society,” Abelsen told Greenland’s leading newspaper, Sermitsiaq AG. “To make the Arctic Winter Games in 2016 a success, it is necessary to have a strong collaboration across the public, private, organizations and civil society .I look forward to uniting these forces.”

Abelson, who participated in the AWG in 1992 as a cross-country skier, said she wants to ensure that “we as a country can be proud and satisfied with the holding of the AWG in Greenland.”

Part of her job will involve recruiting 1,400 volunteers to help out with the event.

The last time Nuuk hosted the AWG in 2002, events were split between Nunavut and Greenland.

In 2016, according to Sermitsiaq, the hockey events will take place in Iqaluit.

The 2016 AWG in Nuuk will not feature six events due to a lack of sporting infrastructure in Greenland’s capital city: midget hockey, dog mushing, curling, speed skating, figure skating and gymnastics.

A recent joint news release from Alaska, Yukon, the Northwest Territories and Nunavut said they planned to hold a separate winter sports event in another place for sports eliminated from the Greenland program.