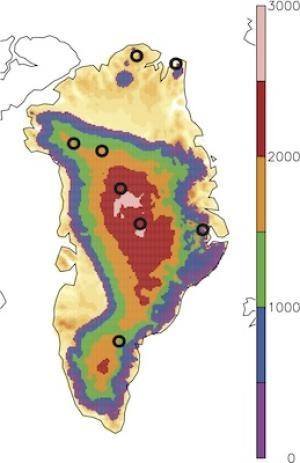 Simulated ice thickness for the Greenland ice sheet for the last interglacial period (about 126,000 year ago) shows that there was no ice in northern Greenland. Circles show locations with ice core data. (IMAGE COURTESY OF THE BJERKNES CENTRE)

The northern part of the Greenland ice sheet may be “very vulnerable to a warming climate,” and this could produce up to seven metres of sea level rise, say scientists.

That’s their conclusion in a new study from the Bjerknes Centre for Climate Research in Norway, which was based on simulations with global climate model and an ice sheet model of the last warm period.

This period, 126,000 years ago, is the most recent period in the world when there were relatively warm temperatures at high northern latitudes.

Then, Arctic temperatures were much warmer than now found in the region — roughly similar what’s expected for the 21st century from projections of global warming, the scientists say.

During that interglacial period 120,000 years ago, the Greenland ice sheet was “significantly reduced in size compared to today.”

Model simulations show an extreme retreat of the northern part of the Greenland ice cap in response to the warm interglacial climate, “a climate not unlike what we expect on Greenland in the very near future,” a recent news release from the Bjerknes Centre points out.

That result is surprising, as temperatures on northern Greenland are now colder than in the southern part of the island, the centre’s scientists say.

They say this is mainly due to more precipitation which now leads to more melt in the southern part of the ice sheet.

Today, most scientists expect that the southern part of the Greenland ice sheet will remain the most vulnerable to a changing climate.

And there are several studies monitoring ice streams and fjord temperatures along the coast of southern Greenland.

But the Norwegian scientists’ study suggests that the northern part of Greenland near the Arctic Ocean should also be looked at “particularly closely.”

“In this area, part of the ice sheet is grounded below sea level, and can respond rapidly once it starts receding,” they say.

Their study concludes that the Greenland ice sheet “might once again experience a sustained period with temperatures comparable to that of the last interglaciation, with its potential consequences for global sea level.”

If the Greenland ice sheet were to melt completely, it would result in an increase in mean global sea level by about seven metres.

The study by Andreas Born at the University of Bern and Kerim Nisancioglu at the Bjerknes Centre and University of Bergen was published earlier this month in the European Geosciences Union journal The Cryosphere.