“We need an Arctic Ocean dedicated to peace and science” 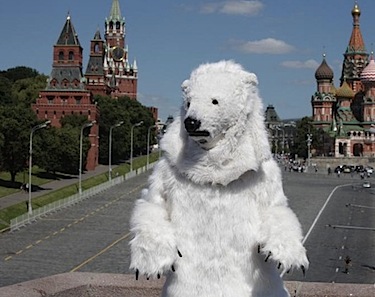 A Greenpeace activist dressed up as polar bear on Moscow’s Red Square demands immediate global action to protect the Arctic from oil drilling. The Red Square was one of many global landmarks featured June 21 as part of Greenpeace’s “Arctic Rising” photos, which track the sunrise across the planet. (PHOTO COURTESY OF GREENPEACE) 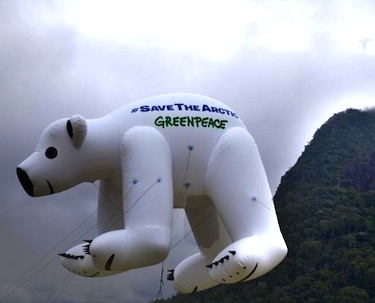 Greenpeace launches its “Save the Arctic Campaign” in Rio de Janeiro, Brazil, during the Rio +20 earth summit, using a balloon in the shape of a polar bear. (PHOTO COURTESY OF GREENPEACE)

Hollywood stars Robert Redford and Penelope Cruz and former Beatle Sir Paul McCartney are among the first supporters of Greenpeace’s call for an “Arctic Sanctuary,” which would see the Arctic Ocean protected from oil drilling, industrial fishing and military activity.

A United Nations resolution to create global sanctuary around and under the North Pole is the goal of the new campaign, said Kumi Naidoo of Greenpeace International at the launch of the “Arctic Sanctuary” drive June 21 during the Rio +20 United Nations Conference on Sustainable Development in Rio de Janeiro, Brazil.

“The Arctic is coming under assault and needs people from around the world to stand up and demand action to protect it,” Naidoo said. “A ban on offshore oil drilling and unsustainable fishing would be a huge victory against the forces ranged against this precious region and the four million people who live there. And a sanctuary in the uninhabited area around the pole would in a stroke stop the polluters colonizing the top of the world without infringing on the rights of indigenous communities.”

Now the environmental group wants to find one million people willing to sign an online petition asking for a sanctuary to protect the Arctic Ocean from development and exploitation.

When the petition reaches one million signatures, Greenpeace will put the signed petition and a “‘Flag for the Future’ on the bottom of the ocean at the top of the world.”

“It seems madness that we are willing to go to the ends of the Earth to find the last drops of oil when our best scientific minds are telling us we need to get off fossil fuels to give our children a future. At some time, in some place, we need to take a stand. I believe that time is now and that place is the Arctic,” McCartney said about why he wants to sign the petition.

On its “Save the Arctic” website Greenpace comes up with some scary reasons to support the Arctic Sanctuary concept:

• “The volume of that sea ice measured by satellites in the summer, when it reaches its smallest, has shrunk so fast that scientists say it’s now in a ‘death spiral.’ For over 800,000 years, ice has been a permanent feature of the Arctic Ocean. It’s melting because of our use of dirty fossil fuel energy, and in the near future it could be ice free for the first time since humans walked the Earth. This would be not only devastating for the people, polar bears, narwhals, walruses and other species that live there — but for the rest of us too;”

• “The same dirty energy companies that caused the Arctic to melt in the first place are looking to profit from the disappearing ice. They want to open up a new oil frontier to get at a potential 90 billion barrels of oil. That’s a lot of money to them, but it’s only three years’ worth of oil to the world. To drill in the Arctic, oil companies have to drag icebergs out the way of their rigs and use giant hoses to melt floating ice with warm water. If we let them do this, a catastrophic oil spill is just a matter of time;”

• “Local people have fished sustainably in the Arctic for thousands of years, but that could be threatened if we let giant fishing companies exploit the Arctic ocean. We need a ban on unsustainable industrial fishing in Arctic waters;” and,

• “The United States has spoken of ‘increased military threats in the Arctic’ and Russia has predicted ‘armed intervention’ in the future. Countries are spending billions on Arctic weaponry, threatening the long-term peace of the region. Nuclear-powered ice-breakers, submarines and fighter jets are being purchased by Arctic states with overlapping claims on the area around the North Pole. The best way to maintain the peace there is to make its resources off-limits.”

“Just like in Antarctica, we need an Arctic Ocean dedicated to peace and science. No country owns the Arctic. It should stay that way,” Greenpeace says.

Meanwhile, on June 22, the final day of the summit, representatives of 190 nations in Rio are expected to endorse a lengthy text, called “The Future We Want,” which vows to “free humanity from poverty and hunger as a matter of urgency” and “to achieve sustainable development in all its dimensions.”

“This is a very good document, this is the vision on which we can build our dreams, our visions and it is important that the member states are united and work together,” said UN chief Ban Ki-Moon.

However, many, including Bolivian President Evo Morales, criticized the document. Morales called the summit vision as “a new colonialism” that rich nations of the world want to impose on developing countries.