“When you’re mother, you feel so much for your children” 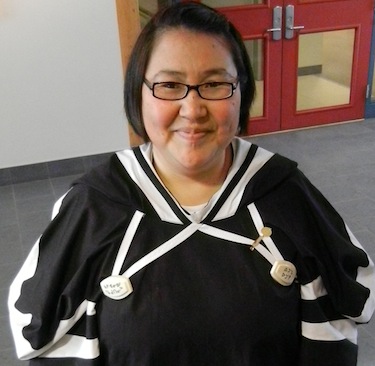 Nattilik MLA Jeannie Ugyuk says the community of Taloyoak is grieving the loss of a young mother and her two sons. (FILE PHOTO)

Residents of Taloyoak continue to grieve the Feb. 2 death of a young mother and her two sons, Nattilik MLA Jeannie Ugyuk told the Nunavut legislature Feb. 27.

Ugyuk was delayed arriving in Iqaluit for the legislature’s winter session while she attended the funerals for 24-year-old Sarah Aiyout and the woman’s two young sons Victor and Jordon on Feb. 21.

The family was found dead in their unit after a fire broke out in the Taloyoak four-plex Feb. 2.

An RCMP forensic investigation revealed later that the fire was deliberately set, and police now say the incident was a murder suicide.

“Sarah Aiyout died in the fire along with her two sons…. as a result of Sarah’s actions,” a Feb. 25 RCMP news release said.

But Ugyuk – along with other residents of the Kitikmeot community – aren’t convinced.

“We hear different stories that there might have been a murder and we apologize to the people of Taloyoak for those kinds of thoughts,” Ugyuk told the assembly. “We don’t like to see those things, because when you’re a mother, you feel so much for your children.”

Ugyuk thanked the RCMP for conducting the investigation, adding that they “provided their information as they received it.”

Some have accused the RCMP of concluding it was a murder-suicide too quickly.

Nunavut’s chief coroner, Padma Suramala, said Feb. 27 that her office is still waiting on toxicology and autopsy results before it can pinpoint the three victims’ cause of death.

Police say they will continue to investigate the scene in the spring when the building is free of ice.

In the meantime, Nunavut’s Department of Health and Social Services has sent a mental health team to Taloyoak to provide counselling services to the community.

The local housing association has found housing for the apartment building’s other tenants, Ugyuk said, while Nunavummiut from across the region have sent food donations to the community.

“We would like to start healing in the community of Taloyoak and we appreciate all the help that we have been receiving,” Ugyuk told the assembly.