Group now on its fourth home in Iqaluit 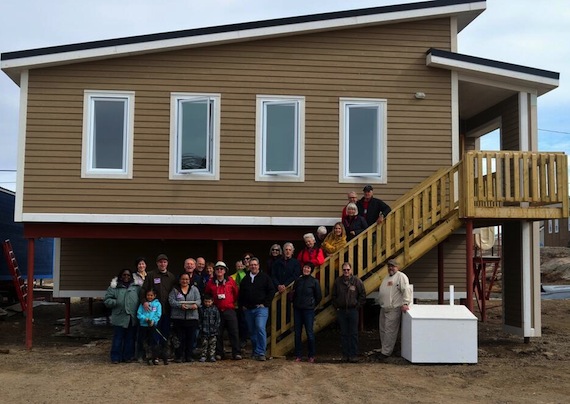 Habitat for Humanity, the non-profit organization that helps families obtain better housing, plans to start another house construction in Iqaluit this summer — the fourth home in its plan to build 10 new homes in Nunavut by 2020.

To kick off the construction of that fourth home, the organization will hold a “midnight sun build” in Apex June 22, similar to the event held last year.

This year’s midnight sun build will include barbecues beside house 3050, provided by the Iqaluit Royal Purple Lodge at noon, when the event starts, and again at midnight when it ends — and entertainment along with chili and bannock provided by the community of Apex will also be on the menu at dinner time.

The first midnight sun build first took place in Iqaluit in June 2009 when Habitat for Humanity linked up with volunteers from Global Village, a volunteer group whose teams travel all over the world to work on Habitat builds.

But before this weekend’s midnight sun build, Habitat for Humanity board members, global village volunteers, and other volunteers gathered June 15 for the dedication of the three-bedroom Apex home of Aaron and Marlene Watson.

“Habitat has affected our life in many ways,” Watson said about the his experience with building his family home with Habitat for Humanity. “We learned about building, the value of volunteering, community, and now just beginning to get used to home ownership. It has been a thoroughly positive experience.”

Habitat for Humanity allows families to pay an interest-free mortgage that is geared toward their income. Partner families must invest 500 hours of “sweat equity” as the down payment for their house.

Watson and his family put in those 500 hours in the home’s construction.

They’re also grateful for all the volunteers, board members and the community of Iqaluit and Apex for being supportive and helpful during the construction period, he said.

And Habitat for Humanity has gained an enthusiastic new supporter.

Watson said he plans to be involved with Habitat for Humanity every new construction.

“In the future I could see myself becoming even more involved with the organization as it is something I believe in and support,” he said.

Some of the volunteers who worked on their home last summer came back June 15 and saw the house completed, after only seeing it as a floor and three walls in 2012, Watson said.

“The dedication was a great event.”

The biggest challenges of the home construction included delays caused by ice blocking Frobisher Bay for about a month last July.

“This stalled many of our supplies from arriving, but being patient is important. These things happen and we certainly weren’t the only people who were waiting for building supplies,” Watson said.

At the dedication, Watson and his family were presented with a qulliq from the local Habitat for Humanity board.

“It is a beautiful symbol of home ownership for us as it was central to, and still is, to Inuit dwellings in the past. Being that is was used for warmth and light it is a fitting ‘housewarming’ gift,” he said.

To qualify for a Habitat house, homeowners must demonstrate a willingness to partner with the organization by contributing 500 hours of volunteer labour towards the building of their home.

If you want to come to the midnight build, no building experience is necessary, but you must be at least 18 years old and you should bring appropriate clothing, such as safe footwear, eye wear, work gloves, and water to the site.

In a recent news release, the City of Iqaluit advised residents that the 2013 build, being a worthy cause, is exempt from two noise bylaws.