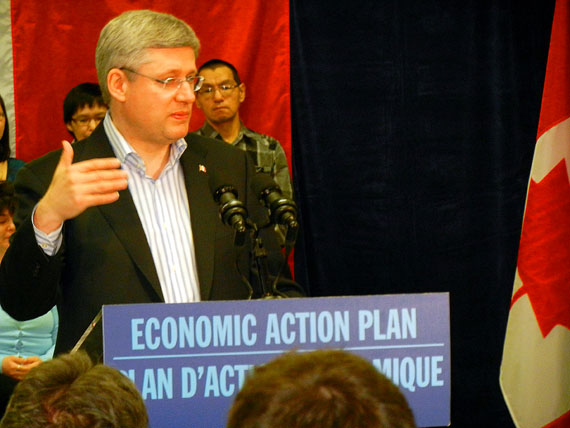 “Sadly, not everyone graduates from high school, but we shouldn’t give up on those people,” Prime Minister Stephen Harper said Feb. 23 in Iqaluit, where he announced $11.1 million in new funding for Nunavut Arctic College. (PHOTO BY JIM BELL) 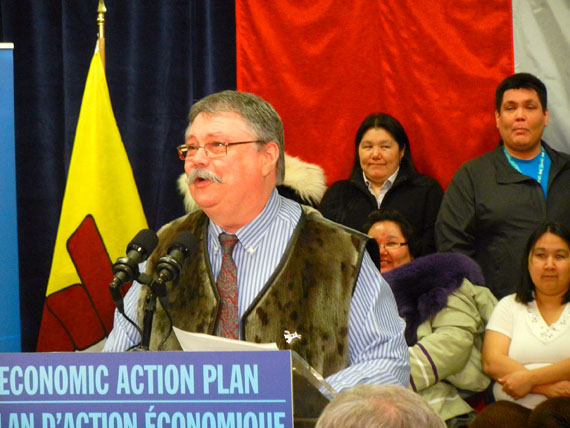 Nunavut Arctic College will get $11 million of that money over the next five years to develop training for jobs in resource development projects as well as aboriginal-focused curriculum, Harper said during an event held at the former Ukkivik residence in Iqaluit.

“Sadly not everyone graduates from high school, but we shouldn’t give up on those people,” Harper said. “There must be a second chance for everyone. This is critical for people who live in remote communities.”

Harper first announced cash for adult education in his 2011 speech from the throne, although few other details were known.

Nunavut Premier Eva Aariak said the Government of Nunavut already puts more than $25 million of its own money each year into community learning centres and adult education programs through Nunavut Arctic College.

But the new money will help the GN focus on better online delivery for adult education programs, better evaluation of student needs and help boost Inuit-language curriculum, she said.

The new accreditation will be recognized at institutions across the country, giving Nunavummiut better access to post-secondary education, she said.

As Nunavut’s job market becomes more sophisticated, Shouldice said the new investment will allow the college to “beef up” programs in demand, such as science and math.

The needs of adult learners vary across the territory, he said, from students missing most of their high school education to others who require only one or two credits to enroll in a particular diploma or degree program.

The biggest emerging job market in the territory is mining, Shouldice said, but the college’s focus isn’t just on trades. He said human resources and finance positions are also in demand.

The federal investment will also boost the college’s delivery of distance education, which will ease what Shouldice calls the “bottleneck” in college residences across the territory.

“We can only train as many as you can put in bed at night,” he said.

The remainder of the $27 million announced Feb. 23 will go to program development at Yukon College and the Northwest Territories’ Aurora College.