“I realized people need to see this again” 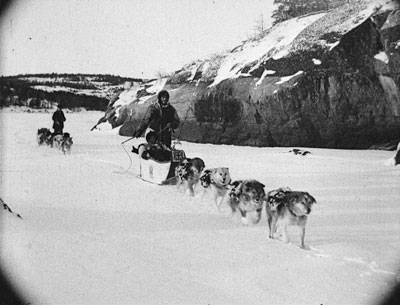 This image of a dog team was photographed in 1920 during the production of a film for the Hudson Bay Co. (HANDOUT IMAGE) 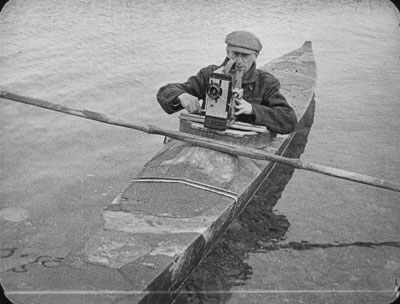 Here’s how one of the filmmakers of a 1920 Hudson Bay Co. filmed some of the images in the film — from a kayak. (HANDOUT PHOTO)

Astro Theatre patrons in Iqaluit were transported to another era Sept. 17.

That’s when filmmaker Kevin Nikkel and historian Peter Geller brought “Treasures From the Far Fur Country” to Nunavut and showed it to a packed screening room at the Astro Theatre.

The silent film was compiled from archival footage shot in 1919 and 1920 at Kimmirut and other small aboriginal communities in Canada.

Altogether, eight hours of footage was recovered in London, England.

But the film, produced by the Hudson Bay Co. in 1920, never came north until now.

“I realized people need to see this again,” Geller said.

The original film was cut up into pieces and segments, but the two filmmakers have been working to restore all two hours of it. So far, they’ve restored 30 minutes.

“I just knew somehow that it should come back to Canada,” he said.

Now they’re showing the result of their efforts in northern Canada, and plan to screen the film in other places, such as Kimmirut, which are shown in it.

The film’s images were captured more than 90 years ago by two photographers from New York City, who were hired by the HBC to lug around half a ton of camera equipment and document the HBC’s travels in the North via foot, canoe, dogsled and icebreaker.

They boarded the HMS Nascopie and headed north from Montreal.

The original title of their film was “The Romance of the Far Fur Country,” produced to mark the HBC’s 250th year in business.

Because it was silent, the film’s subtitles include such sentences as “it’s a great life if you don’t weaken” and “I was but a youth when I learned to hunt, as my father did before me.”

A narrative is woven into the film of a young man from Cumberland Sound who finds a girl to be his wife.

But Nikkel and Geller are also making a documentary on the film itself. That’s why they’re asking people to come forward if they recognize people in the screened footage.

“People are excited to point and say I think I know someone or I think I recognize that,” Nikkel said.

Peesee Pitsiulak, who lives in Iqaluit, came to the screening because 1919 was the year her father was born.

“I really wanted to see what things looked like [that] year,” she said.

However, Pitsiulak felt the film’s story of an Inuk man who finds his wife was likely to have been an arranged marriage and not your typical boy-meets-girl scenario.

“I think the man and the woman were told what to do, because that’s not how they got married back then so it was very much in the control of the filmmaker,” she said.

Nonetheless she really enjoyed the film, Pitsiulak said.“It made me think of my grandparents, because who knows, they could have been in the film.”

It was filmed when people from outlying camps would gather to help with the sealift by unloading the ship.

“That’s why there were lots of tents there,” she said.

The sealskin clothing worn by people in the film also caught Pitsiulak’s attention and the fact that everyone used kayaks to get around.

“The land is so very familiar to me because I grew up in Kimmirut and to see a different era living in the same spot as I did… it was interesting to see.”

The film will be fully enjoyed in Kimmirut, she said.

“It is important for us to see,” she added.

Once the full two hours of it are restored, Nikkel and Geller will bring the film to Iqaluit again.