Healing the wounds of the past, one stitch at a time 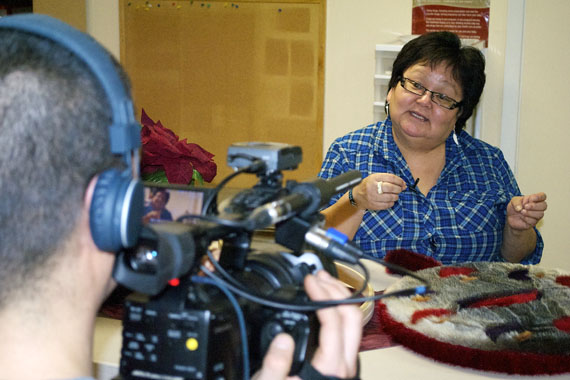 Hannah Oolayou is working on a sealskin wall-hanging that will form part of a virtual quilt, made up of art works from all four Inuit regions in Canada, that Pauktuutit is creating to mark the legacy of the residential school system. (PHOTO BY BRIELLE MORGAN)

The glover’s needle in her hand is more than a tool for tackling tough sealskin — it’s a way of addressing the residential school system. It’s a tool for healing.

Oolayou has been working with women in Ottawa on a collaborative art project that extends to all four Inuit regions. Pauktuutit, the national organization for Inuit women, is the driving force behind the project.

The goal is to create a virtual quilt made up of art works from various groups.

With funding from the Truth and Reconciliation Commission, Pauktuutit aims to provide a creative and collaborative way for Inuit women to deal with the legacy of the residential school system.

They are asking Inuit women to take part by creating art — in any medium — and documenting the process with photos or video.

“It will allow us to tell our history, and for the story to be documented, preserved and shared with all Canadians,” says project coordinator Sipporah Enuaraq.

Oolayou’s group decided to make a sealskin wall hanging. Though it’s hard to come by in Ottawa, sealskin represents the group’s connection to the North.

“I was so proud of the ladies that did the sewing… They were sewing and laughing and healing at the same time because it was their first time sewing sealskin,” Oolayou says.

Enuaraq said that while men are welcome to participate, the goal is to get as many women on board as possible.

“We believe that Inuit women are the building blocks of the community.”

Each of the eleven projects underway so far will be represented by a digital square on Pauktuutit’s website. Visitors to the site will be able to click on the squares to see the different art works.

In addition to the virtual quilt, Pauktuutit will make a photo album and documentary about the process.

Qajaaq Ellsworth is helping Pauktuutit put together the documentary. The Iqaluit-based filmmaker looks forward to shooting the various groups.

“I’ve always been involved in healing and wellness kinds of programs. If I can sort of promote those positive activities going on in the communities, it’s something that I enjoy doing,” he says.

He listens, camera in hand, as Oolayou talks about what her group got from the Pauktuutit project – aside from funding to cover the cost of art supplies.

“The ladies that came here to sew, they had more confidence in using a needle and learned how to sew with the sealskin. Not only that, they left really proud – with their culture.”

Down the street at the Ottawa Inuit Children’s Centre, Tara Arnatsiaq-Barnes is working with a group of women to sew an actual quilt as part of the virtual quilt project.

She says the group came up with the idea together, and that the quilt is “almost like a symbol of comfort that we could kind of cover over ourselves, too.”

Arnatsiaq-Barnes, a social worker, says though residential school doors have long been closed, they shouldn’t be forgotten.

The schools bring up a lot of questions for Arnatsiaq-Barnes. In becoming more knowledgeable about the past, she’s come to understand her own family better.

“It’s hard to explain to other people what has happened in the past… I think Canada as a whole needs to be educated about how that stuff influences not just Inuit people, but everybody.”

Her group will start working on their quilt next week.

Pauktuutit is still encouraging other groups to sign up. The virtual quilt, the documentary and the photo album will be presented in March at their annual general meeting.

Enuaraq says the project will be a testimony to the strength of Canada’s Inuit.

“It shows our resiliency of being able to go forward in a positive way.”