“Thousands of areas that are important to Inuit were recorded” 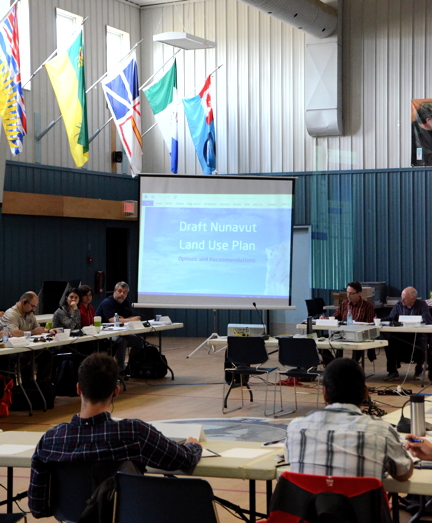 A technical hearing for the Draft Nunavut Land Use Plan began today, June 23, and is open to the public at the Iqaluit cadet hall. Various stakeholders plan to discuss and debate how different parcels of land in Nunavut should be used in the years to come. The hearing is scheduled to conclude June 26. (PHOTO BY DAVID MURPHY)

A long and much-anticipated document inches forward this week in Iqaluit and, though it might not seem exciting to some, it’s history in the making.

Technical hearings for one of the largest land use plans in the world — if not the largest — are unfolding at the Iqaluit Cadet Hall this week, from June 23 to June 26.

“This plan is quite large. It’s one-fifth of Canada’s land mass with trans-boundary areas. And it’s the largest land use plan of its kind,” said Sharon Ehaloak, executive director of the Nunavut Planning Commission.

The land use plan sets out which areas in Nunavut can be used for what purpose — like areas open for potential development or areas which, because of their environmental or wildlife significance, are off limits to development, and protected.

At the hearings June 23, Ehaloak said this is the largest land use plan in the world — “that we know.”

But the Nunavut Land Use Plan is still in its draft phase. These technical hearings are just one more step towards its final adoption and implementation.

These hearings are mostly about discrepancies in data about the land. Certain types of land in the territory are categorized differently based on the NPC’s data.

“Fundamentally these technical sessions are more about the data that backs up the proposed land use plan tools,” said senior planner Peter Scholz in the NPC’s introductory remarks at the public hearing.

There’s a host of representatives participating in the technical hearings this week including from Aboriginal Affairs and Northern Development Canada, the Nunavut Wildlife Management Board, the Northwest Territories Nunavut Chamber of Mines, Baffinland Iron Mines Corp., the Government of Nunavut and Nunavut Tunngavik Inc, among others.

“Your agency may disagree with the recommended land use management decisions,” Scholz said.

“You will have reasons for that disagreement. Your perspectives may be based on source information that is different from ours,” he said.

But this is where land disputes are supposed to be resolved.

“We hope to come to common understanding on all data that’s available, where uncertainties arise and how those uncertainties impact policy decisions,” Scholz said.

After this session comes a pre-hearing conference in mid-July.

There’s no word yet on when, or if, final public hearings will occur, or if the federal government will pick up the tab.

“Our co-operative work here will greatly increase the speed and effectiveness of the public hearing,” Ehaloak said.

“And also ease the task of the ministerial team for the final adoption of the Nunavut Land Use Plan,” she said.

The NPC said they consulted with “over 30 communities” in Nunavut, Nunavik, northern Saskatchewan and Manitoba. Ehaloak said there was an extensive public consultation period to get to this point.

“Thousands of areas that are important to Inuit were recorded during that unprecedented consultation,” she said.