Temporary scrap yard, and site of recent fire, should be emptied this summer 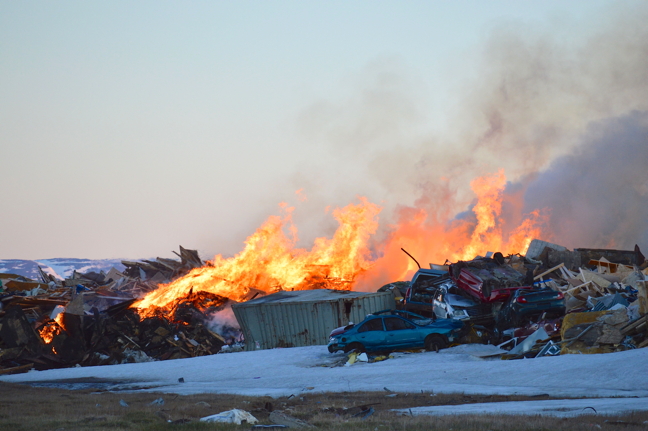 Now you see it… soon you won’t. Iqaluit’s temporary scrap metal holding site, the scene of a recent dump fire, could be emptied out by the end of this summer by Kudlik Construction Ltd., if all goes as planned. (PHOTO BY STEVE DUCHARME)

Hundreds, if not thousands, of tonnes of scrap metal will make its way south this summer, and out of Iqaluit’s overflowing landfill, thanks to a contract recently awarded by the city to dispose of its excess garbage.

Deputy mayor Romeyn Stevenson confirmed to Nunatsiaq News June 24 that approximately 29,000 cubic metres of metal waste will be removed from the city’s landfill.

All 167 vehicles now in the city’s car yard will also be removed, as well as all of the city’s collection of used tires.

The contract marks the only removal of scrap from the city’s landfill in almost six years.

Kudlik Construction Ltd., which was awarded the contract, has two sealift seasons to remove the debris, but Stevenson says the city’s goal is to have everything gone in 2016.

“They’re allowed to take it out in two seasons, but we’re hoping they’re going to take it all in this season,” he said.

“They’re certainly going to take enough that everything will be off that temporary site this summer.”

That temporary site was the location of the city’s most recent dump fire on June 20 — igniting fears among Iqalungmiut of a repeat of 2014’s four-month “dumpcano” ordeal.

Stevenson said the city hopes the removal of the scrap metal will signal the end of the temporary site’s usage this September.

“That’s the current hope, that we will free up so much space we won’t need it at all,” he said.

And the removal of the waste buys city administrators extra time to transition safely to it’s new landfill site.

“Getting the steel off of the site will allow us to have enough space to continue the landfill for the next two years on that [current] site, which is basically the estimate for how long we’ll be there before that site will need to be closed and a new site will need to be opened,” he said.

In the meantime, city landfill staff will have enough yardage to properly control its stockpile of burnable debris — thereby limiting the chances of another dump fire.

“The Department of Public Works feels like if we can get ahead of the pile, we could burn what we get on a regular basis,” Stevenson said on the city’s scrap wood collection.

The contract awarded to Kudlik Ltd. will be paid entirely through federal gas tax funding, saving the city from having to find cash in an already tight budget.

“This one [qualifies for the gas tax funding] because it involved the decommissioning of that landfill,” Stevenson said.

As part of the contract, Kudlik gets to keep any revenue from the sale of the scrap in the South.

The fire marshal is still investigating the cause of the June 20 dump fire, but Stevenson believes closing the temporary site will decrease the chance of a similar fire taking place again.

“Part of the problem was that the temporary site was often unsupervised and it didn’t have a proper fence around it to keep people out so there was a lot of stuff going on there that shouldn’t have gone on there,” he said.

“Having it all back in the landfill doesn’t eliminate that possibility… but it will lessen the potential danger.”