Hey kids! Wanna be NTI president for a day? 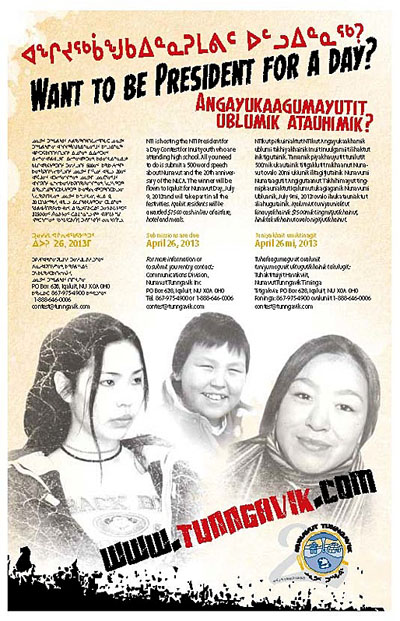 Nunavut Tunngavik Inc. is holding a “President for a Day” contest, open to all Inuit students in Nunavut high schools. The contest calls for 500-word entries about Nunavut and this year’s 20th anniversary of the coming into force of the Nunavut Land Claims Agreement. (IMAGE COURTESY OF NTI)

Nunavut Tunngavik Inc. is holding a “President for a Day” contest for Inuit high school students in Nunavut.

The contest celebrates the 20th anniversary in 2013 of the coming into force of the Nunavut Land Claims Agreement on July 9, 1993.

Inuit high school students who wish to enter the contest must write a 500-word speech about Nunavut and the 20th anniversary of the agreement.

The winner of the contest will be flown to Iqaluit for Nunavut Day activities, when they’ll deliver their written speech at the unveiling of a 20th anniversary monument.

The winner will also co-host Nunavut Day activities with NTI president Cathy Towtongie and perform other duties as required.

“The negotiations and signing of the Nunavut Land Claims Agreement was such an important, memorable time in our history as Inuit and Canadians, and I look forward to working with the winner of this contest on Nunavut Day,” Towtongie said in a news release.

“It is an excellent initiative and one that will allow the talent of young Inuit to shine,” she said.

If the winner already resides in Iqaluit, a prize of $1,500 will be awarded in lieu of airfare, hotel and meal costs.

Submissions are due April 26, 2013 and can be sent to NTI’s Iqaluit office via Canada Post or email to contest@tunngavik.com.