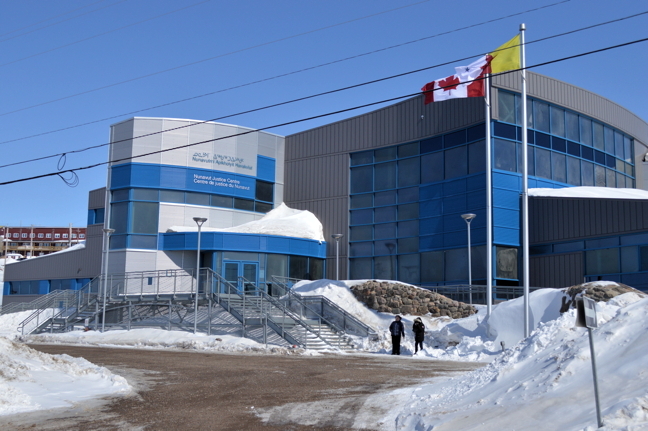 The long-standing litigation over alleged historical sex crimes by former Sanikiluaq teacher, Johnny Meeko, is on course for a final verdict this summer, after Meeko abandoned his submission to enter new evidence into his nearly two-year-old trial, May 29.

Dressed in a grey T-shirt with navy sweatpants, and writing in a book of crossword puzzles, Meeko sat beside his lawyer, James Morton, who told Justice Neil Sharkey in the Nunavut Court of Justice that his client was dropping his application for additional evidence.

The 62-year-old Meeko has been living under restrictive bail conditions since he was charged in 2012 with 32 alleged sex crimes, ranging from sexual groping to rape.

The acts mostly involve underage students he taught on the Belcher Islands between 1978 and 2007.

“We will not be proceeding with the application to re-open [the case],” Morton told the court May 29.

“Mr. Meeko wishes simply to have the case decided.”

Meeko stood trial for his alleged crimes in 2015, but the proceedings ended without a verdict because Morton successfully applied to the court late last year to enter new evidence in defense of his client.

That new evidence was expected to raise the possibility of collusion by one or more of the case’s nine complainants, whose identities are protected by a court-ordered publication ban.

Collusion is the act of conspiring together, usually to commit fraud.

“The nature of evidence was to pursue the question of whether it could be shown that some individual had allegedly been asked to falsify a claim of sexual abuse by Johnny Meeko,” Sharkey summarized for the court, May 29.

Morton told the court that the two witnesses subpoenaed to deliver additional testimony regarding the alleged collusion would be unable to attend the court.

One witness—who was not mentioned by name—had lost confidence in his ability to testify, Morton told Sharkey.

“He indicated that while he was withdrawing nothing, he was less than fully willing to come forward and his recollection may not have been as strong as it could be,” Morton said, adding that a second witness was unable to attend court due to travel documentation issues.

Sharkey agreed with Morton’s submission that it was not his client’s intent to artificially delay the court process.

“Its fairly obvious that he wants the case concluded as well,” Sharkey noted, and said that both of the witnesses subpoenaed in the supplementary evidence application by Morton acted, “in good faith.”

Nevertheless, Sharkey told lawyers he intended to open court again on the morning of May 30 to address the “systemic delays” over the course of Meeko’s case and to announce a date for a final verdict.

Sharkey suggested that the details of this case, which go back nearly four decades, may have contributed to an unavoidably long legal process, adding “it is what it is, and we’ll go on from here.”

“I believe this case has proceeded as efficaciously as it could have and we’re in a position where I have full arguments before me to consider,” he said.

“We don’t need to hear any further arguments. We’re looking at a date for a verdict.”

Before concluding the hearing, Sharkey said he would meet both lawyers in chambers to fix a date for Meeko’s verdict, which he said would take place “this summer.”