Hold on tight: Nunavut sea can converted into “climbing cave”

“Climbing isn’t just a physical sport. It’s mental as well. It teaches you how to fail, how to get back up and persevere” 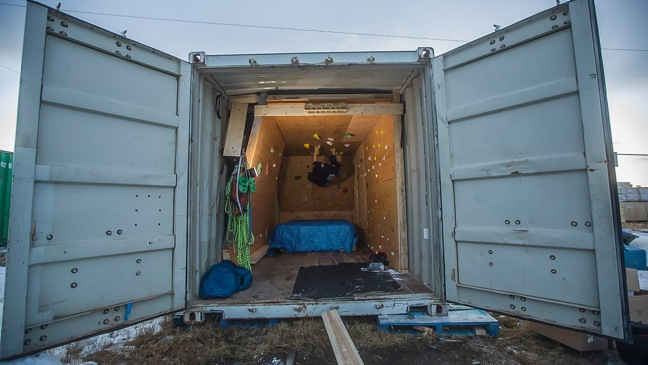 Mark Aspland in his element—a “climbing cave” he built for youth inside an unused sealift container on the Iqaluit beach. (PHOTO COURTESY MARK ASPLAND)

If you build it, they will climb.

At least, that’s what Iqaluit’s Mark Aspland is hoping.

Aspland, an avid climber who’s lived in Iqaluit for the past four years, has spent the last year or so planning and chipping away at a mini climbing gym inside an old sealift container and he now wants to give it to the city or a private group so youth and other members of the public can use it.

“It’s a way of introducing a new activity,” said Aspland, a cinematographer and videographer who runs Aksut Media in Iqaluit.

“Climbing isn’t just a physical sport. It’s mental as well. It teaches you how to fail, how to get back up and persevere, to get through a route you built that was once impossible. You just keep working at it. I think it’s a great motivator to introduce to youth up here.”

A video he made of the project and uploaded to his Facebook page Nov. 2 had 4,600 views just 24 hours later and has caught the attention of gear companies who are now sending Aspland free loot so he can add to what he has or replicate the project elsewhere.

That includes Kilter, an American climbing grip company out of Colorado, which is already sending Aspland a box of free grips to support the project.

Holds, or grips, are those multicoloured, multi-shaped polyurethane bumps on climbing walls that you grab and step on.

The idea for the “climbing cave” came together as Aspland started to notice the number of unused sea cans around the city.

Coupled with his desire to make something kids could use from spring to fall in Iqaluit, he devised a plan to build his own climbing gym.

So he bought a sealift container, paid NCC Development Ltd. to frame the inside professionally and then, with scrap wood he scavenged from the dump, he filled in the walls and installed the grips.

He probably sank about $4,000 into the pilot project as a way to show how easy it is. But with donated gear, and in-kind services, communities outside of Iqaluit could probably do it for much cheaper, with a little guidance.

“My hope is to build more of these in the communities. I’m looking at Pangnirtung now,” Aspland said. Now that he has a prototype, he’s considering applying for Department of Health community wellness funding to build more.

And while he’s climbed on it, and feels it’s safe and solid, he knows that before opening it to kids and other members of the public, it has to be inspected and insured. That’s where he’s hoping the City of Iqaluit will take it off his hands, have it inspected and then open it up for use.

Right now it’s sitting on Inuit-owned land on the beach, by permission of the Qikiqtani Inuit Association. And it’s getting a bit too cold to use it now. But he’s hoping to open it up again for youth in the spring, and perhaps move it to a more central location.

“It’s tough, it does take a lot of strength. But you work that up. I basically built a gym where a beginner can come in there and feel confident or somebody who’s been climbing can get in there and feel pretty challenged.”