“I’m a working person, eh? Not doing nothing isn’t very good for me” 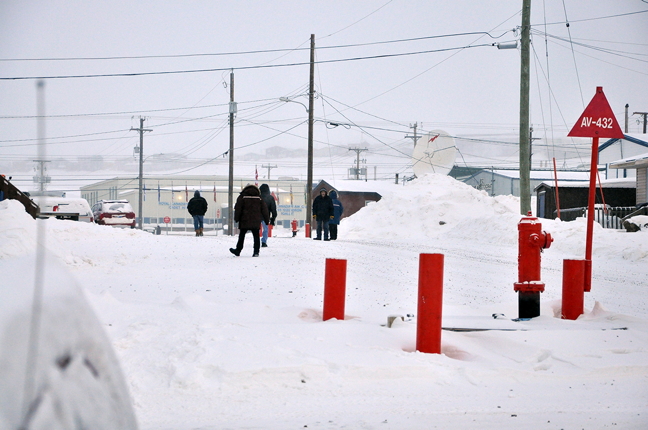 Men leave Iqaluit’s homeless shelter Feb. 10 after a breakfast of raisin bread with slices of processed ham. Men staying at the shelter have to find somewhere else to stay warm, eat and pass the time during the day because the shelter is closed between 8:30 a.m. and 5 p.m. 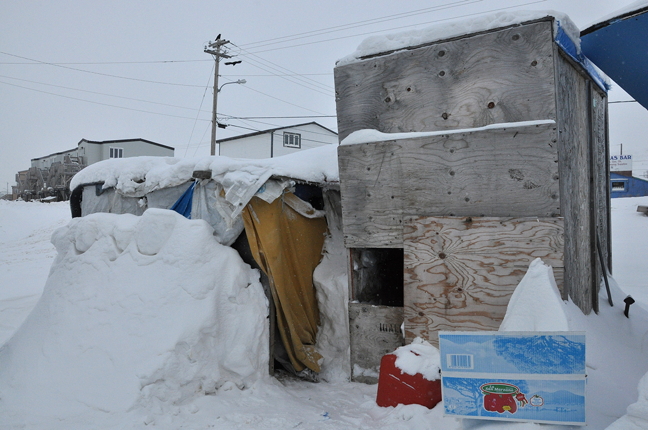 One of the smallest shacks on the beach front, this shack showed signs of recent use with blankets laid down on an old mattress. Far too small to stand up in, the shack is mostly buried in snow, likely for insulation. 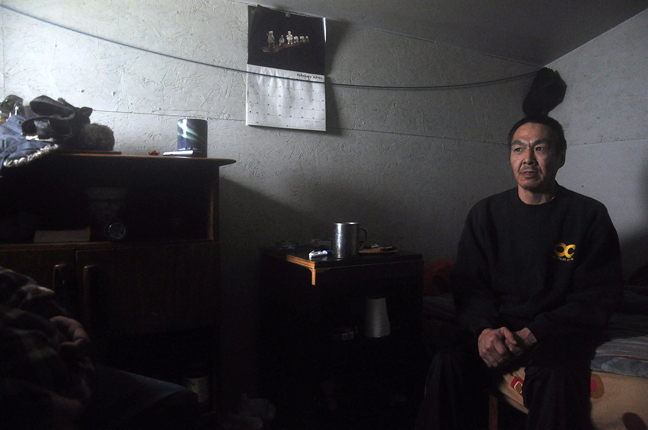 Nushupiq Kilabuk inside the modest but sturdy shack he built for himself on the Iqaluit beach front. (PHOTOS BY THOMAS ROHNER)

Nushupiq Kilabuk, a 50-year-old assistant carpenter from Iqaluit, says he’s proud of the craftsmanship he put into building his shack on the city’s beach.

“I like to build stuff, so I tried to build my shack nice… I like everything about carpentry, except for insulation,” Kilabuk said, laughing as he sat on the edge of his home-built bed atop linoleum tiles.

Kilabuk rubbed his hands for warmth and looked out the only small window in the eight-foot-square hut.

A Coleman stove hissed softly on the floor beside the bed; a few dishes and pieces of cutlery were piled on the floor.

“I think about wanting to go to work all day. I’m a working person, eh? Not doing nothing isn’t very good for me. The boredom is hard,” Kilabuk said.

For three months, Kilabuk said he slept on couches of families and friends but, like a lot of other homeless people he knows, he didn’t like it.

“So I decided to get my own shack, not bother anyone. Now I’m lucky.”

Walking around town, it isn’t hard to find homeless Iqalungmiut.

Some homeless men stay at the men’s shelter, which turns them out on the street from 8:30 a.m. until 5 p.m. During those hours, they try to keep warm in places like Tim Hortons, the library, the soup kitchen and the Tukisigiarvik Society.

According to a 2014 survey of homelessness in Nunavut’s three largest communities, the Government of Nunavut found fewer than 100 homeless Nunavummiut.

But MLAs strongly contested that number, and a 2010 Nunavut Household Needs Survey found at least 1,200 homeless in Nunavut.

While the GN, for its part, has yet to define what “homelessness” means, that’s of little consequence to those living from couch to couch, on the street or in shacks.

The stories of homeless Iqalungmiut are tied together by common threads: many speak of break-ups with partners, unemployment, addictions, health problems, debts owed to the Iqaluit Housing Authority and long waits on the social housing list.

When you’re homeless, the mornings during the coldest months — December, January and February — are the hardest, Kilabuk said, so he sometimes sleeps on the couches of family and friends. But that makes him uncomfortable.

Kilabuk said his son, who is also homeless, asked if he could come live in his father’s shack.

“I said no, just stay with my brother. There’s five of them in a one-bedroom house.”

Kilabuk, who said local construction companies told him they have no work for him, has a line on a possible job in Arctic Bay.

“I’d go up there. At least I’d work, have a warm place to stay and sleep,” said Kilabuk, whose father took him out of school to learn carpentry in Grade 6.

Over lunch of hot soup and sandwiches at Iqaluit’s soup kitchen Feb. 10, a 50-year-old woman says she’s been homeless for three years now, ever since she split up with her ex-boyfriend.

The woman, who asked to be anonymous because of the shame she feels being homeless, said she’s spent most of her life working.

“Now I have to beg for food like a dog. I know I can go three days without food — I’ve done that lots of times,” she said.

The woman said she fell and injured her back, but when she presented a doctor’s note to her employer, the employer said she “quit.”

When asked what home means to her, and what she misses most about it, the woman broke down, sobbing silently.

Another woman walked up behind her and rubbed her back.

“This is really upsetting, see? It brings up a lot of pain for us,” said the second woman, adding she too spent a year homeless in Iqaluit.

Both women complain that Iqaluit has no shelter for homeless women — only for women who are abused.

“We sure need a women’s shelter in Iqaluit, not just a battered woman’s shelter. I lost 60 pounds in two years, walking around, homeless,” one of the women said.

Across town at the library, 67-year-old Joe Pauloosie said he’s been homeless for three or four years now.

“The family I was living with, they died, and I had no more home,” he said.

Pauloosie said the feeling of boredom is one of the most difficult parts of living this way.

Pauloosie has stayed at the men’s shelter for the past few years and said he doesn’t see that changing any time soon.

Others have tried living in the shelter, but prefer their shacks on the beach.

In a dimly-lit, windowless shack thick with naphtha fumes, a 40-year-old who only gave his first initial, D., said his seven years living in a shack have afforded him peace, quiet and some liberty.

“I lived in the shelter for a few years, but I like the shack better. I don’t want to be judged by white people, and told what to do,” D. said.

After years of sexual abuse, D. said he usually prefers to be alone now. And his shack feels like home.

“My father built the shack, that’s why I like to stay here. Sometimes I dream about him and talk to him. I like that,” he said.

Like others, D. said he has spent years trying to pay back a debt to the Iqaluit Housing Authority, years on the housing wait list, and thinks often of wanting to work.

Two of his neighbours are employed. One said he was almost done paying off a debt to the housing authority and then hoped to get on the housing list.

Another neighbour — a chipper 45-year-old-man with a big smile — said he’s not homeless, but moved into a shack temporarily after his house burnt down and he went back on the housing authority’s wait list.

That was four years ago. 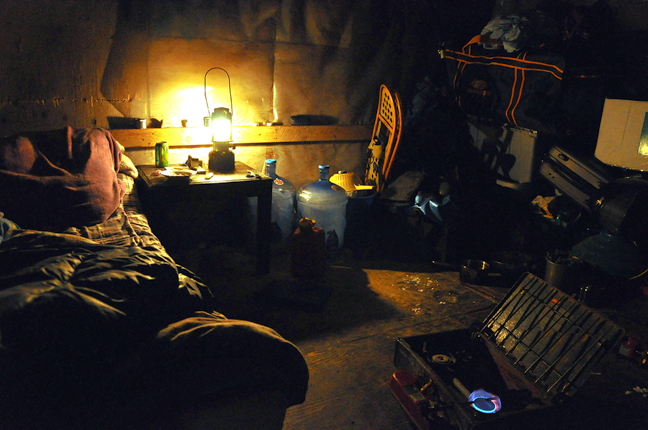 The windowless shack that a homeless Iqaluit man has lived in for seven years. Despite the strong smell of naphtha fumes, the man said he prefers living in the shack than staying at the men’s shelter or with family and friends because of the quiet and freedom it offers.