Housing issues on the front burner at Nunavut legislature 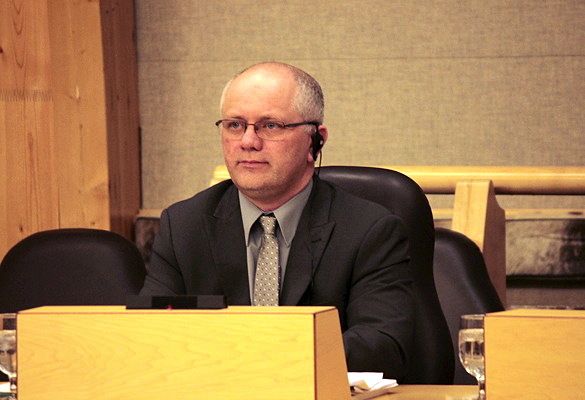 Hudson Bay MLA Allan Rumbolt was pleased to see a group of senators tour his home community of Sanikiluaq in April to see first hand how people in Nunavut deal with overcrowded homes. (FILE PHOTO)

That’s according to Hudson Bay MLA Allan Rumbolt, who thanked the Senate committee for their April 21 visit during his member’s statement in the legislature May 31.

“It is essential that as many federal parliamentarians as possible have the opportunity to experience first-hand the housing challenges in the North,” Rumbolt told fellow MLAs.

Rumbolt said the Senate committee “clearly recognized… the magnitude of the investments that will be required to significantly increase the housing stock in Nunavut, reduce overcrowding and address such issues as mould infestation.”

“I think the degree of overcrowding here is worse than it is… in the rest of the country,” Dyck told Nunatsiaq News in Iqaluit April 18.

The committee will produce a report on the North’s housing crisis, and make recommendations to the federal government to address that crisis. That report is expected to be tabled in the Senate this fall.

“I very much look forward to the committee making its recommendations to the federal government,” Rumbolt said.

Rumbolt also asked Housing Minister George Hickes to table a presentation given by officials of the Nunavut Housing Corp. to that committee on March 23.

Rumbolt wasn’t the only MLA to raise Nunavut’s longstanding housing crisis in the legislature May 31.

Netsilik MLA Emiliano Qirngnuq asked Hickes during question period for the number of applicants currently on the waiting list for public housing in the two communities that Qirngnuq represents, Kugaaruk and Taloyoak.

Hickes said that Kugaaruk currently has a wait-list of 79 people and Taloyoak, 76.

According to population figures from the 2011 census, 365 adults live in Kugaaruk.

That means more than one in five adults in Kugaaruk are on the wait-list for public housing.

Similarly, about one in six adults in Taloyoak are on the wait-list for public housing, according to census data.