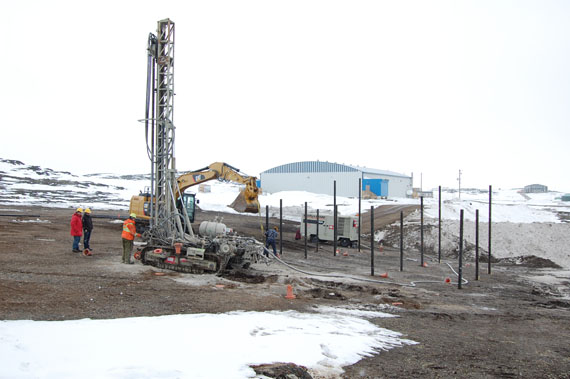 Quebec’s social housing agency has begun construction on two units of a new housing model in the Nunavik community of Quaqtaq, which it says it better adapted to a northern reality. (PHOTO COURTESY OF SHQ) 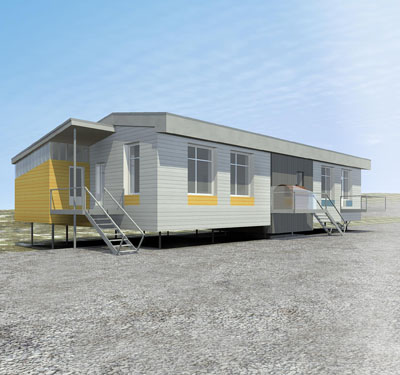 Here’s a 3D model of the prototype under construction, a design inspired by Nunavimmiut and drafted by Montreal architectural firm FGMDA. (IMAGE COURTESY OF FGMDA)

Quebec’s social housing agency has teamed up with Makivik Corp. and the Kativik Municipal Housing Bureau to unveil a new housing model that it says is better suited to the North.

The Société d’habitation du Québec has been working on the project since 2012, when regional organizations held a workshop with Nunavimmiut to understand how social housing could be better adapted to the climate and Inuit culture.

The result is a prototype of two units currently being constructed in the Ungava Bay community of Quaqtaq that are meant to withstand cold, shifting permafrost and offer more living space to the home’s tenants.

“Firstly, the prototype will have pile foundations, which are still underutilized in Nunavik,” said the SHQ’s Hélène Arsenault.

“Pile foundations will enable permanent and solid anchoring to be ensured in a largely rocky terrain.

“Secondly, in order to achieve a better energy rating….the walls and roof will be highly insulated and sealed and the windows will be triple glazed,” Arsenault added.

“Finally, the heating system will also be innovative since it will function with a water heater heat exchanger.”

The housing unit design takes inspiration from what are called “Passive House” requirements, a voluntary standard for energy efficiency in building standards.

But the home’s design also aims to reflect Inuit culture and tradition, by offering a cold porch and warm porch for tenants.

Additional storage is built into the home’s attic, kitchen and laundry room, the SHQ said.

For example, the kitchen has storage under an island counter area designed to hold large chopping boards. The island can also be removed when families want to use the room’s full floor space.

Elsewhere in the home: two lockable storage units for hunting weapons and ammunition. A small balcony next to the living room has been designed as an emergency exit in case of fire.

“The Inuit participants were there to identify their needs, express their feelings, preferences and impressions, define the indoor areas of the houses and identify their expectations,” Arsenault said about the workshops that inspired the home design.

The prototype was designed by Montreal firm FGMDA (Fournier Gersovitz Moss Drolet et Associés Architectes) Architects, which has designed a number of projects in Nunavik and Nunavut — including the Canadian High Arctic Research Station in Cambridge Bay.

The two new units should be completed by December, but the SHQ hasn’t yet said at what cost, or who will live in the two units.