Human activity takes a toll on caribou habitat in Nunavik 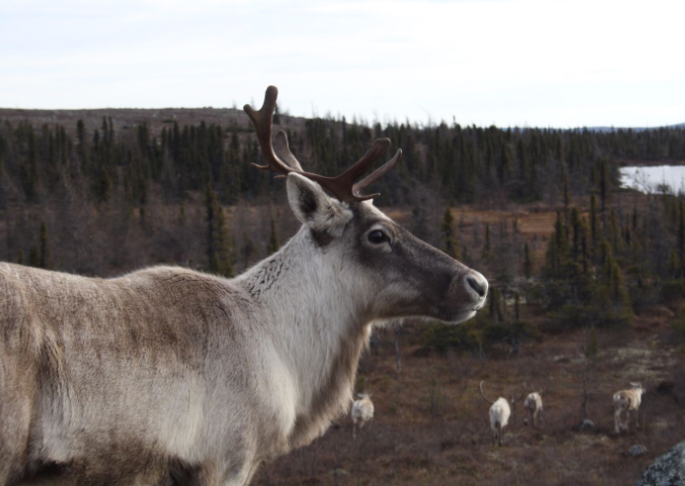 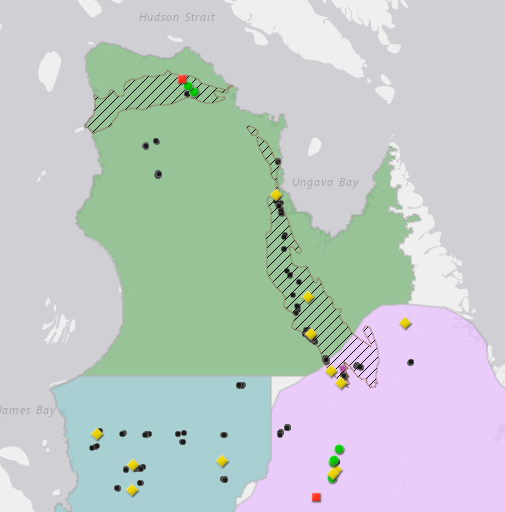 The green area of the map shows mining operation and exploration sites within Nunavik’s migratory caribou range between 2010 and 2014. The red dot is the closed Asbestos Hill mine, the green dots are Raglan Mine and Nunavik Nickel mines and the yellow dots are Hopes Advance Bay, Ashram and Lac Otelnuk mining projects. (IMAGE COURTESY OF LAVAL UNIVERSITY)

Researchers at Université Laval say human activity in northern Quebec is damaging and reducing the extent of caribou habitat, along with the health of the herds that migrate through Nunavik each year.

A new study attempts to quantify that impact by looking at how the animals have shifted their ranges as roads and mines are developed in the region.

The new study, called Mining Development, Migratory Caribou and Land Use in Northern Quebec, attributes some of that decline to human disturbance—mining operations, roads and villages situated as far as 21 kilometres away from the animals’ range.

Every year, the George River and Leaf River herds embark on two long migrations to reach their summering and wintering grounds, covering a span of 1,000 kilometres.

Each spring, the caribou migrate north to their calving area in the Arctic tundra, where in June, the females calve and then continue on to their summering grounds in search of food.

In September, the herds move south to the wintering grounds where the boreal forest and taiga meet.

But along that route, the number of mining operations and projects that straddle northern Quebec and Labrador has doubled between 1990 and 2016, even despite the fluctuation of metal prices in recent years.

In Nunavik, there are only two operating mines—Glencore Raglan and Nunavik Nickel—though a number of other mineral exploration projects dot that region, known as the Ungava Trough, as well as the Ungava coast south into Labrador.

As caribou move farther away from human-inhabited areas, the impact is felt on Inuit communities, where the caribou harvest can represent the annual equivalent of $10,000 in income for a Nunavimmiut family.

The Laval researchers acknowledge other factors could also play a role in the herds’ declining populations. Those include an increase in predators to the region, like the grey wolf and the black bear, sport or subsistence hunting, extreme weather events and competition for resources among other herbivores, like muskox—all factors being studied by the Caribou Ungava research group.

The interface allows viewers to see the region’s infrastructure, potential development sites and communities, as well as the range of the migratory caribou.

The project was presented on Wednesday, Dec. 13, to the Arctic Change 2017 conference in Quebec City.