“Inuit represent one of the most vulnerable populations in Canada” 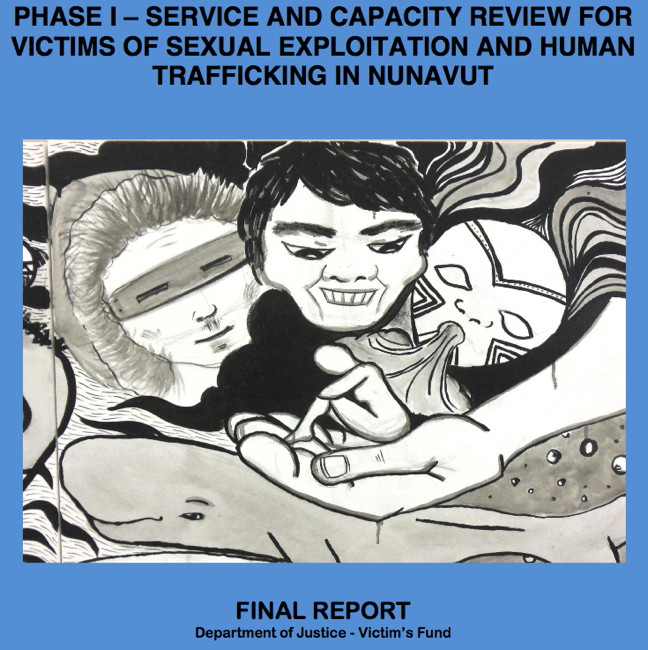 A November 2013 report, prepared by a Gatineau-based consulting firm for the federal Department of Justice, compiles dozens of anecdotes describing human trafficking and sexual exploitation among Inuit in Nunavut and in southern Canada.

The first investigation into a suspected human trafficking case in Nunavut occurred in Pangnirtung in 2011: allegations that a child started selling herself for money.

Her mother knew about it, and approved.

“The file was not substantiated, so no charges were laid,” reads a recent report that documents stories of human trafficking and sexual exploitation in Nunavut.

There were other incidents, in other communities.

A year after that 2011 incident, for example, an adult woman forced an 11-year-old to perform sexual favours for money, liquor and drugs.

“Again the file was unsubstantiated, so no charges were laid,” the report said.

A year after that, in 2013, a 31-year-old woman was charged with human trafficking — the first time the RCMP had actually laid that charge in Nunavut.

The charge was later downgraded to four charges of prostituting a minor.

These are some of the dozens of disturbing stories compiled by Helen Roos of Roos-Remillard Consulting Services into a 146-page report released in November 2013 entitled “Service and Capacity Review For Victims of Sexual Exploitation and Human Trafficking in Nunavut.”

Roos, who prepared the report for the federal Department of Justice, is president of the consulting firm and chair of the Ottawa Coalition to End Human Trafficking.

The report began with information obtained from about 40 Inuit living around the notorious Montreal Road-Vanier neighbourhood in Ottawa, where, Roos said, they “reported experiences of grooming, baiting, conning and exploitation to perform forced sex work, either at the hands of their common law partner, boyfriend, parent or pimp.”

The report also cites information obtained from the RCMP and other anectdotes where no formal criminal charges were laid — but the sheer volume of stories seems to imply sexual exploitation is widespread among Inuit in Nunavut and beyond. (See document embedded below.)

“Human trafficking is a highly clandestine criminal activity and is chronically under-reported to police by victims internationally as well as in Canada,” she says in the report.

Victims are often hesitant to talk to social workers, the report says, because those professionals have a legal obligation to report abuse to the RCMP and victims aren’t always prepared to follow through with legal proceedings.

Sex offenders often threaten their victims not to tell anyone about the crimes, which is another huge disincentive to disclose abuse.

The report says for these reasons, “Inuit represent one of the most vulnerable populations in Canada” for human trafficking and sexual exploitation.

Inuit are also vulnerable because there is a history of family violence, homelessness or overcrowding, and growing up poor in isolated communities, the report said.

“Even more startling is that in Canada, the predator or trafficker moniker, particularly in small communities, has been a parent, spouse, boyfriend/girlfriend, friend or employer who exploits a youth or adult, either for forced labour, forced sex or both,” the report said.

Roos-Remillard also gathered information from 32 survivors of sexual exploitation and human trafficking for a two-day therapeutic art project in Ottawa in August of 2013.

During their research, the consulting firm actually discovered someone trying to sell their Inuk infant on Facebook.

“The RCMP responded immediately, but no information was provided on charges or follow-up,” the report said, adding that the person who was allegedly procuring the Facebook sale warned authorities, “not to interfere in their business.”

The consulting firm heard that another man in Iqaluit had been staking out the Northmart, and asked one mother with a newborn son, “How much for your baby?”

Another man, non-Inuit, allegedly paid money to the parents of an underage girl to have sex with her.

“The authorities were dispatched, but no action was taken,” the report said.

Teens are being sexually exploited in Ottawa, small communities, and in Baker Lake, by mine workers from Meadowbank.

Some former residents of the closest town, Baker Lake, are quoted in the report as saying, “Everybody sees it and knows it’s happening, but nobody does anything about it.”

Five case studies were also documented alongside the report. One included a woman living in Ottawa who was lured by a sexual predator through the Internet dating site Plenty of Fish.

In another online dating fiasco, an African man, using the Plenty of Fish website, took advantage of a woman in Iqaluit by promising to marry her.

She sponsored him in Canada and linked their bank accounts together. The man ultimately bankrupted her and ran away with her money.

Men also try to lure women into the sex trade in southern Canada, the report said. They become pimps, promising protection and security, while using the woman to turn a profit.

“According to the outreach staff, the teen girls share a considerable amount of information about abuse, sexual exploitation and disclosures that connote that trafficking is occurring,” the report said.

Custom adoption in Nunavut may also contribute to the vulnerability of Inuit to human trafficking, the report noted, since they do not involve the same scrutiny as formal adoption.

“Custom adoption requests remain highly fluid with few checks and balances to verify the safety of the child with any minimal criminal background checks or assessment,” the report said.

The consulting firm made several recommendations to stop human trafficking including:

• better protection of children and youth

Survivors of human trafficking said one of the greatest social gaps in Nunavut is the lack of mental health counselling and sexual assault trauma services. They said an addictions treatment centre is needed in Nunavut too.