“I want to be careful how we interpret this, but let’s just say it’s a stark difference” 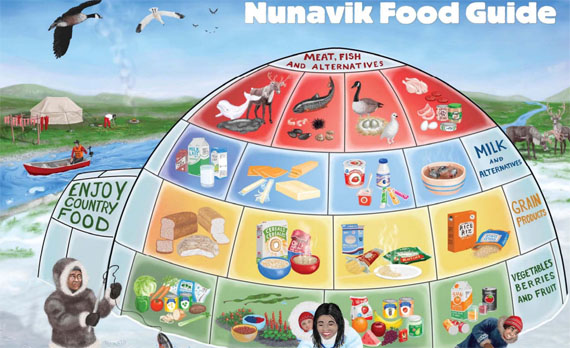 The cover of the Nunavik food guide. A new study finds that Nunavik children whose families can’t get enough food are shorter than other children. (FILE IMAGE)

The results of a new study in Nunavik seems to suggest that children who don’t get enough to eat are shorter than their food secure peers, and more at risk for iron deficiency and anemia.

The study, published in the latest issue of the Canadian Journal of Public Health, compared the height of 294 children throughout Nunavik, mostly aged 10 and 11, and determined that half the children lived in homes that were food insecure.

Researchers then compared the height of food insecure children to those who live in homes where there was enough to eat.

“Those children who were food insecure were significantly shorter, by about two centimetres, compared to their food secure peers,” said a summary of the report provided by one of the study’s authors, Catherine Pirkle of Université Laval.

“It’s a fairly large difference,” said Pirkle, over the phone from California where she is travelling.

“If you look at Canadian growth charts for children of that age, we’d expect that most 10- to 11-year-olds will grow five to seven centimetres in a year so a difference in two centimetres is approximately one-third to half a year’s growth.

“I want to be careful how we interpret this, but let’s just say it’s a stark difference. Two centimetres is not negligible.”

“When you measure iron depletion, it’s a fairly good indicator of micro-nutrient status,” Pirkle added. “So it’s an indicator that children are not consuming enough iron in their diet.”

The height comparison was made only between Nunavik children and was not compared to the Canadian average, Pirkle said.

This project is an offshoot of the long-term Nunavik Child Development Study which was first launched in the mid-1990s by Laval University and Wayne State University researchers to study 300 infants and their mothers.

The second phase, launched in 2005, included 294 children and their mothers. Researchers at Laval have been monitoring the children ever since and decided to add this food security component.

• Could you please describe the amount eaten by your family: enough or not enough?

• Do adults in your family have to cut down the size of meals because there is not enough money, yes or no?

• Do children in your family have to cut down the size of meals because there is not enough money, yes or no?

If mothers answered yes to any of those questions, the family was considered moderately to severely food insecure.

Pirkle said researchers can’t make a direct causal link between food insecurity and a child’s stature because other factors can also impact growth and development.

But it clearly shows a link between food security and child development and that health care professionals might want to consider food insecurity — or related issues such as poverty and stress — as a risk factor when it comes to child growth.

Researchers have presented their results to the Nunavik Board of Health and Social Services, with whom they have been working, and so authorities are well aware, and were not surprised, with the findings, she said.

A 2004 study commissioned by the Nunavik Regional Board of Health and Social Services found that two out of three Inuit in Kuujjuaq were in danger of going hungry, and that children and women were at greatest risk.

That study found that Kuujjuammiut often had to borrow money or food, stop paying rent, use food from community freezers or food banks, eat at their friends’ homes, make crafts for sale, go fishing or ration food to stave off hunger.

Another study out of McGill University in 2011, based on results from the Qanuippitali health survey of Inuit, found that six out of 10 Inuit in northern Canada don’t get enough to eat or don’t eat the right things.