“We need every Inuk” 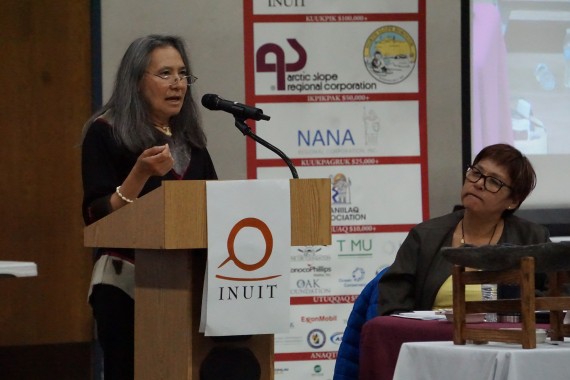 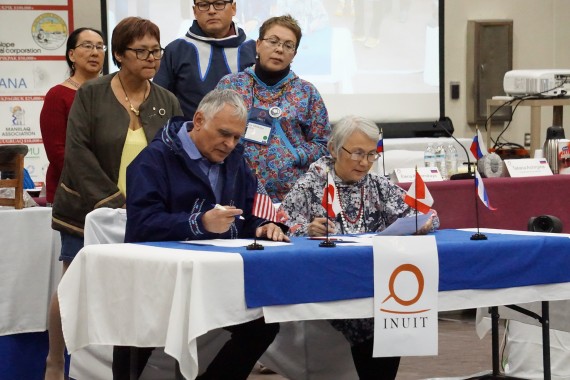 The Inuit Circumpolar Council, the organization representing Inuit of Alaska, Canada, Greenland and Russia, closed its 2018 general assembly last week with a new leader and a renewed commitment to unity and action on the international stage.

As its new chair, the ICC chose Dalee Sambo Dorough, a human-rights specialist, political science professor at the University of Alaska Anchorage and a self-described member of Alaska’s “pipeline generation” who came of age during the North Slope oil boom.

Dorough, who has been involved with the ICC since its early days when it was founded by North Slope Borough Mayor Eben Hopson, said the Utqiagvik gathering sends important messages across the circumpolar North.

The ICC, one of six indigenous permanent participants in the Arctic Council, has already done much to make the Inuit voice heard on the international stage, she said.

Now, with nations and corporations around the world looking to use and exploit the Arctic, the ICC must do more, Dorough said. There are “countries that have designs on our Arctic homeland,” she said. “We must become more assertive about our status and rights to effectively state what is indeed ours—the lands, territories and resources of the Arctic.”

To help amplify a unified Inuit voice across the world, she said, there will be improved communication between the four national ICC offices and between the ICC groups and local people.

As at every quadrennial assembly in the ICC’s 41-year history, the Utqiagvik assembly produced a declaration that outlines the organization’s goals and strategy for the next four years. The Utqiagvik Declaration is divided into 10 sections with 58 clauses covering such diverse subjects, including food security and threats to it from climate change, the status of youth, protection and promotion of indigenous languages, sustainable wildlife and environmental management and sustainable development.

One of the most prominent parts of the declaration is a call for the ICC to work on the international stage to promote Arctic sovereignty and the idea of the Arctic as a haven of peace.

Dorough, in her address to the assembly, said the call to erase Arctic borders “conjures up a powerful state of mind and the oneness of our people.” But she cautioned that the “geopolitical and geostrategic reality” of the national governments in the Arctic poses a formidable challenge to that goal.

“The objective of a single Inuit government institution will require careful and crucial analysis in the future,” she said. “When our time comes, it will come. It’s a significant political enterprise.”

At the Utqiagvik assembly, which drew nearly 1,000 participants, delegates raised concerns about specific problems in the Arctic. Among them were the threats of Arctic shipping, environmental impacts to health and shortage of Native school teachers.

Increased shipping in less-icy Arctic waters was described as inevitable—and so were the problems associated with it.

Already, there have been numerous spills, and cleanup has been difficult if not impossible, said Austin Ahmasuk, marine advocate for the Nome-based Kawerak Inc., a Native nonprofit. Birds and marine mammals have been found “massively oiled”—with contamination similar to what occurred during the 1989 Exxon Valdez spill—and volumes of spilled oil and hazardous materials are on the rise, he said.

It is crucial for shippers in the Arctic to stop using cheap heavy fuel oil, Ahmasuk said.

“Heavy fuel oil is the bottom of the barrel. It’s the dirtiest fuel that ships can burn,” he said. There has been progress in the campaign to establish a ban on that type of oil, with a mandate that lighter and cleaner fuels be used, he said. But work on behalf of the Inuit is made more difficult because Indigenous organizations do not have any formal status with International Maritime Organization, he said.

The warmup of the Bering Sea region is also taking a toll, said Ahmasuk, who displayed a map showing that waters of the northern Bering Sea and southern Chukchi Sea have had surface temperatures as high as 17 degrees Celsius. A decade ago, there was debate about whether the Bering Sea was transforming from an ice habitat into a pelagic habitat, he said. “We have very strong evidence that this is no longer debatable,” he said.

ICC delegates heard a presentation from Kuupik Kleist of Greenland on the state of the North Water Polynya, the biologically productive zone of open water between Canada and Greenland. Inuit refer to the area as Pikialasorsuaq; Inuit from Canada and Greenland have formed a Pikialasorsuaq Commission that is recommending establishment of an international Inuit management regime to safeguard the polynyna. The commission also recommends that the area be free-travel zone for Inuit.

Kleist, a former Greenlandic prime minister and one of three commissioners in the Pikialasorsuaq group, said the recommendation for Inuit management and control has significance that goes beyond this particular polynya.

“We lived here before the states existed and before the artificial borders were drawn on the map,” Kleist said. Establishing Inuit control will be a challenge, he said. “It will not be easy to reach our ultimate goal to once again become the masters of our homeland and our seas,” he said.

The 2022 ICC general assembly will be held in Ilulissat, Greenland.