“Arctic shipping will not be economically viable even under ideal conditions” 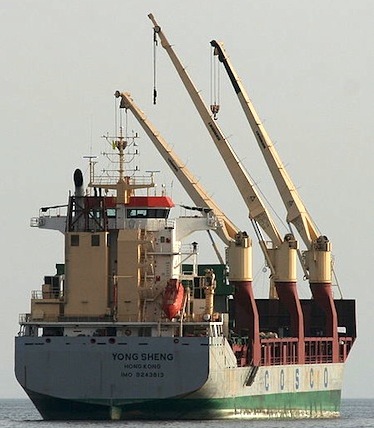 An ice-free Arctic Ocean is unlikely to attract a major increase in shipping traffic to and from China, the world’s largest economy, according to a recent report by The Arctic Institute. The think tank found that major trade routes will develop in the southern hemisphere, far from routes plied by ships like the Yong Sheng, pictured, which travelled from Europe from China via the Northeast Passage this past fall. (FILE PHOTO)

An ice-free Arctic will not bring more international shipping to Arctic maritime routes to and from China, the world’s largest market, according to a recent study by The Arctic Institute.

Polar regions are a long way from the busiest trade routes across the Indian, Pacific, and Atlantic Oceans, the study says, and these routes are already well-served with large-scale shipping infrastructure that does not exist in the Arctic.

Authored by the institute’s founder and executive director Malte Humpert, the study, entitled “The Future of Arctic Shipping: A new silk road for China?,” points out that China is the largest trading nation in the world.

By 2030, Humpert writes, China will “by some estimates, control seventeen of the top twenty-five bilateral trade routes” worldwide.

The country now controls more than 20 per cent of the world’s container fleet, and by 2030 it will “own more than a quarter of the global merchant fleet.”

Shipping activity to and from the world’s biggest economy will largely shift away from the northern hemisphere to countries in the south, the study says, where Africa and Latin America will supply “a growing share of China’s commodity needs.”

China is the world’s dominant consumer of raw materials and hydrocarbon resources such as oil and gas, the study says.

More than 90 per cent of the country’s iron ore imports come from the southern hemisphere. Canada is listed as China’s seventh biggest source of iron ore, at about 16 million tonnes in 2012.

Oil imports “originate primarily from countries far removed from the Arctic,” the study says, and “Arctic bulk and liquids shipping will remain of very limited importance.”

As scientific monitoring of sea ice levels in the Arctic report new record lows every year, “a host of new reports and studies predict a rapid increase in shipping activities in the Arctic,” Malte writes.

But the distribution of China’s main trading partners, investments in port infrastructure along existing trade routes, and “a new generation of ultra-large container ships” offer huge savings that reduce shipping costs “to the point where Arctic shipping will not be economically viable even under ideal conditions,” the study says.

Other studies on the potential of Arctic shipping point to reductions in shipping distances to Europe, which could be as great as 40 per cent.

But Humpert notes that China’s fastest growing ports are in the south of the country.

Moreover, trade with Europe accounted for just 17.1 per cent of the country’s total in 2012, compared to 51 per cent with its neighbours in the Pacific region.

The study does not mention potential shipping routes through northern Canada. A passage around ice-free East Siberia and the Arctic Ocean north of Russia is shown as the shortest shipping route to Rotterdam, a major European port in the Netherlands.

The Chinese cargo ship Yong Sheng covered such a trip from Aug. 8 to Sept. 10.

Growth in shipping between China and North polar regions “will mostly consist of seasonal destinational transport,” the study says, “delivering supplies into the Arctic for its increasing economic activity and transporting the region’s natural resources to markets in East Asia.”