“Even in today’s climate, ice conditions must still be considered severe” 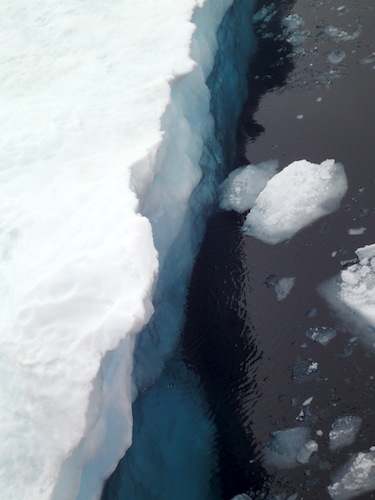 Thick, multi-year ice is still found in the Northwest Passage during the summer — and will be for years, new research suggests. (PHOTO BY JANE GEORGE)

Wait for another 40 years, and then — maybe — the Northwest Passage will be truly navigable for shipping traffic during the summer.

A new study on ice thickness in the passage show there’s still a lot of thick, multi-year ice to be found in the channels between the Arctic islands in the warmer months.

“Results indicate that even in today’s climate, ice conditions must still be considered severe,” says the study, Ice Thickness in the Northwest Passage, published Sept 25 in Geophysical Research Letters.

The results have “important implications for the prediction of ice breakup and summer ice conditions,” as well as for the assessment of sea ice hazards during the summer shipping season, say the authors, Christian Haas, from York University and Stephen E.L. Howell from Environment Canada.

They suggest that serious ice conditions, which can persist throughout the summer, will continue to provide “ample potential for encounters with hazardous ice.”

Even in recent years, the Arctic islands remain a source for multi-year ice and a sink for Arctic Ocean multi-year ice, they say, so much so that “shipping through the NWP should not be taken lightly.”

For their study, the authors relied on data from the first airborne electromagnetic ice thickness surveys over the NWP, carried out in April and May 2011 and 2015, over first-year and multi-year ice.

The thickest ice of more than three metres and up to four metres mean thickness was found in the regions of Byam-Martin Channel, Viscount Melville Sound, Peel Sound, M’Clintock Channel, Victoria Strait and Queen Maud Gulf