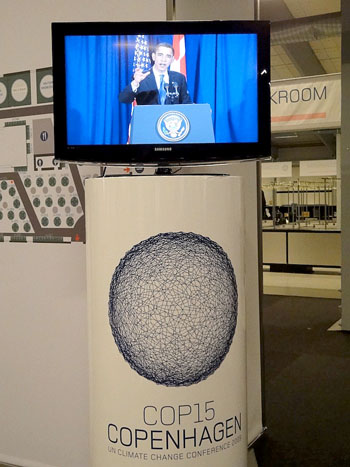 U.S. President Barack Obama appears at last-minute, late-night news conference held in Copenhagen in 2009 at the end of COP 15 — Obama is expected to appear in Paris at the start of the COP 21, which gets underway Nov. 30. The “High-Level Segment” to be attended by ministers and head of delegations opens Dec. 7. (FILE PHOTO)

With less than a month to go before global climate change talks start in Paris, indigenous peoples and the Arctic Council are getting ready for the Conference of Parties, or COP 21, the 21st annual meeting of the nation states that make up the United Nations Framework on Climate Change.

A commitment to limit the average global temperature rise to two degrees Celsius by the year 2100 through a binding agreement on cutting greenhouse gas emissions remains the goal of COP 21, which will see 40,000 delegates from 195 nations gather in Paris from Nov. 30 to Dec. 11.

The Inuit Circumpolar Council will join with Saami from Norway, Sweden, Finland and Russia in an Arctic indigenous delegation.

They will be led by the ICC’s international president, Okalik Eegeesiak, thanks to financial assistance from Norway.

The ICC and Saami delegation members will advocate for help for Inuit to adapt to climate change, perhaps through the creation of a special adaptation fund for the Arctic.

Then, a last-minute deal called the “Copenhagen Accord,” between the United States, China, Brazil, India and South Africa, contained no legally-binding targets to reduce greenhouse gas emissions.

And, in 2009, you couldn’t find any acknowledgment of the vulnerability of Arctic peoples in the accord, which only mentioned “least developed countries, small island developing states” and “the need of countries in Africa.”

“The Arctic Council is rising to the challenge of meeting significantly greater expectations,” said David Balton, chair of the Senior Arctic Officials and U.S. Deputy Assistant Secretary for Oceans and Fisheries, in an Oct. 23 statement, after Arctic Council SAOs wrapped up a meeting in Anchorage, Alaska.

That was their first get-together since the U.S. took the chair of the Arctic Council from Canada last April in Iqaluit.

Balton also told reporters that Arctic Council representatives would visit Paris “to talk about the work of the Arctic Council particularly related to climate change.”

The two degrees Celsius goal is not low enough, the indigenous forum said, with its participants asking nations to support a deal that would aim to limit warming to 1.5 C.

“The proposed 2 C goal will increase hunger and poverty of millions of indigenous peoples,” said a recent news release from the International Work Group for Indigenous Affairs on Indigenous preparations for COP 21.

In the Arctic, a two-degree rise in average global temperatures will still see Arctic temperatures increase by at least 3 C to 6 C higher by 2100.

As stated in a position paper, the indigenous forum called for:

• a commitment to the goal of keeping the global temperature increase below 1.5 C;

• full and effective participation of indigenous peoples, including women and youth, in climate change-related processes and programs at local, national, regional and international levels; and,

• direct access to climate finance for indigenous peoples from developed and developing countries.

You can find more information about the COP 21 meeting here.