If Alaska can make renewable energy work, why not Nunavut? 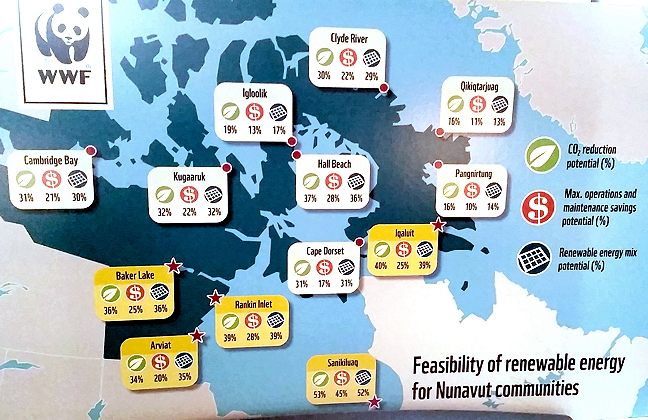 A poster showing the results of some research into the potential for renewable energy options in various Nunavut communities, research conducted by the University of Waterloo World and commissioned by World Wildlife Fund Canada. (PHOTO BY THOMAS ROHNER)

While Nunavut communities continue to rely on dirty diesel fuel as their only energy source, other Arctic regions can breathe easier and sit prettier after integrating renewable energy sources into their energy supply.

That was the message conveyed to about 80 delegates from around Nunavut and the circumpolar world Sept. 15 at a renewable energy summit in Iqaluit.

The summit, co-hosted by the World Wildlife Fund and the territorial and federal governments, brought together representatives from northern communities, industry and government to argue that the time to invest in renewable energy in the North is now.

“In Alaska, there’s not really any question as to whether renewables can be developed in remote communities. We’ve been doing that for 15 years,” Gwen Holdmann, the director of the Alaska Center for Energy and Power told Nunatsiaq News at the Frobisher Inn.

“The challenges are around the details of integration, getting higher contribution levels from renewables, turning the diesel engines off—that’s what we’re working on now.”

Out of Alaska’s roughly 150 communities, ranging in population from 20 to 10,000, there are 70 that have renewable energy sources connected to electricity grids, Holdmann said.

That includes 37 wind projects and some communities that rely 100 per cent on wind energy, when it’s available.

Currently, renewable energy supplements electricity, not heating, needs in those communities, which Holdmann said represents about 25 per cent of overall energy needs.

But so far in Nunavut, renewable energy infrastructure is almost non-existent.

“There’s a reason why there’s no renewables installed in Nunavut, and there’s a tonne installed in Alaska, and it’s not because we’re more forward-thinking or environmentally-minded. It comes down to economics,” Holdmann said.

“It comes down to who wins and who loses with those subsidies. In Alaska, it’s very clear because we don’t subsidize any kind of non-residential electric power… and that way there’s not much of a market distortion,” Holdmann said.

“If there’s no clear benefit to consumers, the system won’t take hold.”

At least one industrial consumer in Nunavut may be on the verge of seeing that benefit: TMAC Resources Inc., which owns a gold mine about 100 kilometres south of Cambridge Bay.

Tugliq already supplies the Raglan nickel mine in Nunavik with 10 to 15 per cent of its electricity needs, Abbatiello said Sept. 15.

“We are producing 10,000 megawatt hours of energy on an annual basis at Raglan. That represents about two million litres of diesel the mine is saving on. And it saves about 6,000 tonnes of greenhouse gas emissions.”

The Raglan project, which Abbatiello said could readily be replicated in Iqaluit, uses a three megawatt wind turbine and both short and mid-term energy storage technology to better integrate the renewable energy into the mine’s grid.

“Communities too could be benefiting like this, getting away from diesel. We could be reducing diesel use for electricity in some Nunavut communities by up to 50 per cent,” he said, adding different combinations of renewable energy fit different environments.

The WWF paid a University of Waterloo team of researchers to find out what forms of renewable energy potential exist in a number of Nunavut communities.

The community of Clyde River, with help from Greenpeace, recently installed some low maintenance solar panels on its community hall as a pilot project to see how much energy it could generate when the sun is in the northern hemisphere.

Miller, the former mayor of Toronto, said municipalities need the help of policy leaders at the territorial or provincial and federal levels in order to invest in renewable energy.

“If people are engaged and thinking, how do we better our environment, our economy and our lives by including renewable energy as part of our energy source, that strength filters up democratically to provincial and federal governments.”

The fact that the territorial and federal governments co-hosted the summit shows that Nunavut communities want to move forward on renewable energy, Miller said.