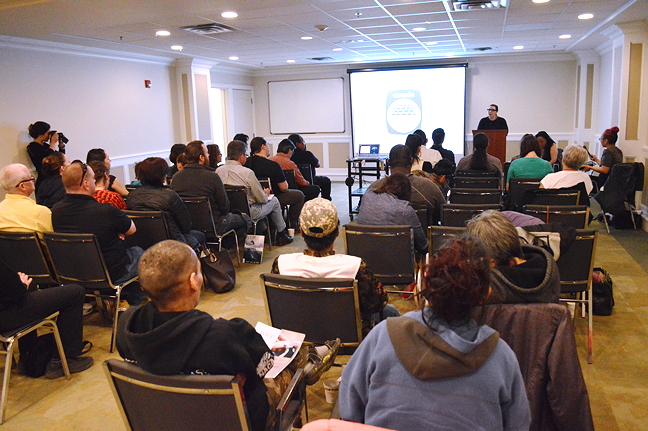 A crowd gathers at Iqaluit’s Hotel Arctic July 7 to hear details of the new Inuit-controlled “Igloo Art” certification which will replace the decades-old, government-controlled “Eskimo Art” logo and management structure. 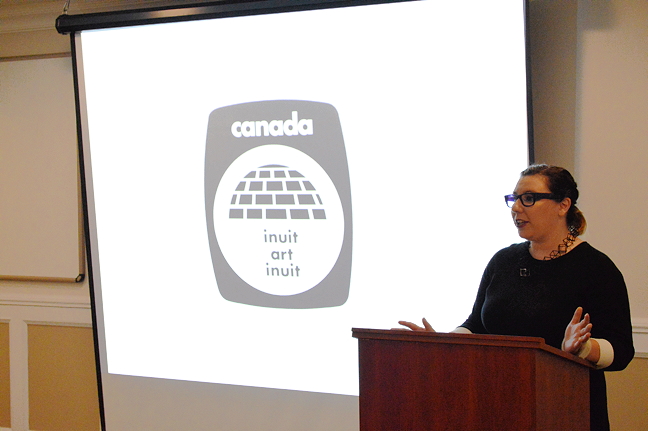 One of Canada’s most recognizable art certifications will continue into the future under Inuit management for the first time in its history—and it’s got a new name to mark the occasion.

“Eskimo art” Igloo tags, a certification program for Inuit art that began in 1958, was formally transferred from federal government control to the Inuit Art Foundation during an afternoon event at Iqaluit’s Hotel Arctic, July 7.

“Times have changed since 1958,” said Indigenous and Northern Affairs’ director of Inuit relations, Elizabeth Logue, who appeared alongside representatives of the Inuit Art Foundation and Inuit Tapiriit Kanatami.

The North’s gold standard for art authentication will be renamed “Inuit art,” which was, coincidentally, the starting point of negotiations between Ottawa and the IAF, when representatives scrawled out the updated logo on a piece of paper at a meeting, Logue explained.

“The notion of a government authenticating Inuit art has come and gone and its time for the tag to be led and organized by an Inuit-led organization,” she said.

Negotiations for the transfer have been ongoing since 2014, said IAF chairman Sammy Kudluk, who went on to credit the hard work of both sides in the deal.

IAF said the next step would be conducting a series of consultations with communities, artists and sellers to determine how the tag can be updated to suit Inuit needs.

Those consultations will foster confidence in the brand, IAF’s executive director, Alysa Procida said, with the goal to become more “responsive and accountable” to Inuit artists.

According to an economic snapshot commissioned by INAC earlier this year, Inuit art contributed more than $87 million to the Canadian economy in 2016—factoring in all media such as visual art, music, writing and publishing.

In Nunavut, the visual arts and crafts economy alone was worth more than $37 million in 2015.

The Igloo tag trademark was valued in the survey at about $3.5 million.

However, in a statistical quirk, the study noted that consumers had far more confidence in the tag than wholesalers.

Wholesalers said the igloo authentication added an average value of $7.27 to an item whereas consumers polled felt the tag added $117.23 in value, on average.

“They don’t necessarily have a connection with the community [where the art was made] but they have the tag,” he said, which leads them to explore where the work came from.

“Not only is this something that helps authenticate Inuit art but it also helps spread understanding about Inuit, not just in the moment when the art is produced, but during the life of that piece of art, wherever it goes in the world.”

Obed said Inuit are natural artists who many times balance their creativity with other passions, like his own 10-year-old son who he said wants to be an artist and a fish scientist.

“So many people in our society are artists naturally, despite doing other things in life,” he said.

The INAC commissioned report supports Obed’s claim—only about 10 per cent of Inuit visual artists in Canada report making more than $20,000 annually from their work.

The majority—36 per cent—makes less than $1,000 annually, according to 2016 data provided by Statistics Canada.

The report “help guide policy and address gaps in various sectors,” Logue said, since many of the statistics on the Inuit art economy were non-existent before the study was commissioned.