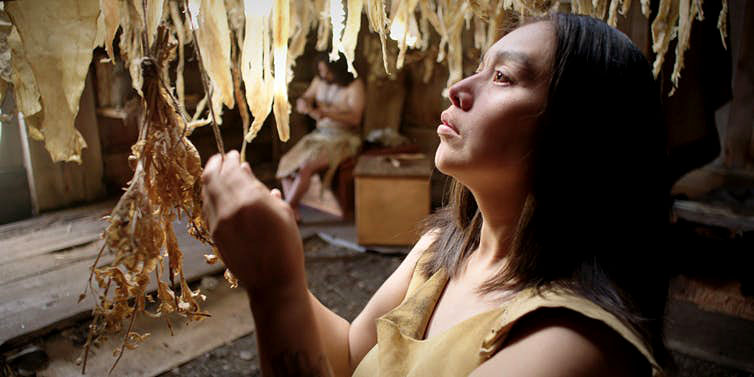 Sgaawaay K’uuna (Edge of the Knife), which premiered at at the Toronto International Film Festival last week, is the first feature film about the Haida people in the Haida language.

The mystery-thriller, directed by Gwaai Edenshaw and Helen Haig-Brown, started as a collaboration between myself at the University of British Columbia, the Inuit film production company Kingulliit and the Council of the Haida Nation.

We hope the film will be a catalyst for language revitalization as well as community economic development.

In 2012, fewer than one per cent of the Haida were fluent in the Haida language and most of those were over the age of 70, so the language was regarded as in crisis.

Edge of the Knife emerged from a community planning process our students had been involved in at Skidegate a year earlier, a year of community engagement and envisioning Haida hopes and dreams.

The top three priorities identified by the Skidegate community were language revitalization, the creation of jobs that would keep youth on Haida Gwaii instead of moving to Vancouver and protecting the lands and waters of Haida Gwaii through sustainable economic development.

I believed a film in the Haida language could potentially serve all three priorities. I pitched the idea to the Executive of the Council of the Haida Nation and the president, Peter Lantin, agreed.

I was inspired by Kingulliit’s success making feature films in Inuktitut (most famously Atanarjuat: The Fast Runner in 2001) that showcase the Inuit culture and employ Inuit as actors, costume and set designers, writers and directors.

Developing a partnership with Kingulliit (formerly Isuma) could mean nation-to-nation capacity building in all aspects of filmmaking.

Jon Frantz, the producer and director of photography on Edge of the Knife, facilitated Kingulliit’s involvement. Frantz is a former UBC masters student who had moved to Igloolik to work with Kingulliit.

We received $200,000 in a Partnership Development Grant from the Social Sciences and Humanities Research Council. My work explores the power of collaborative storytelling through film, which I hope can expand the potential and room for community planning interventions.

My 2010 documentary, Finding our Way: Beyond Canada’s Apartheid, used a collaborative method to tell the story of two small First Nations in north-central British Columbia, the Cheslatta Carrier Nation and the Burns Lake Band.

The process of making that film was the beginning of my re-education about Canada’s history of colonizing and dispossessing Indigenous peoples.

I spent most of the next year on sabbatical and working on Haida Gwaii. The first step was to assemble a Haida Advisory Group composed of elders and other knowledge-holders to oversee the project.

Working with two Haida partners, Dana Moraes in Skidegate and Lucille Bell in Old Massett, we co-designed and facilitated a series of community-based, story-gathering workshops in which community members were asked to suggest what Haida story or stories they would most like to see portrayed in a feature film.

We gathered those ideas and then ran script-writing workshops in the two communities for anyone interested in potentially becoming a writer for the film. After the workshops, we ran a writing contest and Haida community members were invited to submit a short story or film idea.

The jury for that contest was made up of both Haida and non-Haida. We read the submissions without names and the unanimous choice of three winners were the brothers Gwaai and Jaalen Edenshaw, who co-wrote a story, and Graham Richard.

We developed a film script that we had only six months to complete if we wanted to submit it for the 2015 application to the Canada Media Fund. We hunkered down through the winter, working mostly on weekends, to come up first with a three-page story outline, then a 10-page outline.

We then mapped out the entire script in story cards and finally wrote the script. We learned the new script-writing software program together.

Vast amounts of junk food and coffee were consumed as we riffed off each other through long days that flew by. Graham and Gwaai often got on the floor to act out potential scenes.

In creating the story, we reflected on all the ideas that had been assembled during the community story-gathering workshops, and we also worked under two important guidelines from our advisory group.

The first was that the story should be roughly balanced between the northern (Old Massett) and southern (Skidegate) dialects to encourage members of both communities to learn their own dialect and to have a film that would showcase both.

The second guideline was that the film should showcase Haida culture and technology, pre-settler contact.

A third significant factor was that the budget could not exceed $2 million, so we needed to imagine a story and a setting that could be portrayed within all these constraints.

Jaalen Edenshaw was also our historical researcher and checked archives online for details, often as we were in midst of writing. We also worked closely with elders and knowledge-holders from both villages to seek advice about specific scenes, such as a prayer of thanks for the first salmon caught that season.

By September 2015, we heard that we had been funded for $1.89 million. We hired Gwaai Edenshaw and Helen Haig-Brown (a Tsilhqot’in filmmaker now living on Haida Gwaii with her Haida partner and family) as co-directors, and Jon Frantz as producer.

Frantz and other folks from the Inuit film company mentored the Haida in setting up a Haida Production Company, Niijang Xyaalas Productions, which would be the majority owner of the film (with Kingulliit being the minority partner).

Translators fluent in the two dialects set about translating the script. The co-directors set about casting and also holding acting and language workshops.

A few months before the film went into production, all the cast had to participate in a gruelling two-week language “boot camp” where they were sequestered in log cabins on the north shore of the archipelago and taught how to pronounce and say their lines.

I was able to witness some of boot camp and I was bowled over by the commitment the new actors displayed in learning this difficult language. Many explained to me that they felt a responsibility to their ancestors to get it right.

The same was true on location, on the site of an ancestral village in the remote north of Haida Gwaii, in June 2017. The cast was dedicated to faithfully rendering Haida life as it was in the early 1800s.

One of the intentions of the Haida film (with English subtitles) is to generate interest, especially among the youth, in learning the language.

We hope that the film and the script will be developed into a one-month language module for high schools, and that teaching and learning relationships between youth and elders will be sustained beyond the premiere of the film itself.

We also hope there has been sufficient training, tools and infrastructure set up during this project for future Haida film projects under the newly created production company. A group of writers, actors and producers are energized and inspired by this project; they will take this energy forward and train others in various aspects of production.

In that way, the initial community development goals of the project will eventually be fulfilled. I have a new SSHRC grant (2017-21) to monitor and evaluate the impact of the film in relation to our original goals and hope to share more of what we learned along the way.

I feel so fortunate to have been able to spend time in this resurgent community, Haida Gwaii, a magical place. I have both made new friends and continued with my re-education about Indigenous Canada.