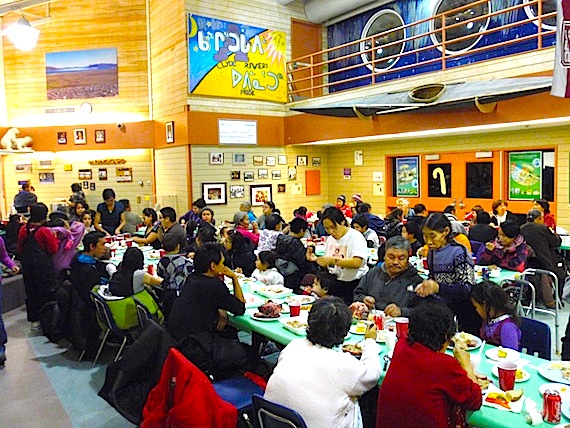 Clyde River’s Ilisaqsivik Society held its annual Christmas party for staff, board members and their families Dec. 15 in the local school. (PHOTO BY SHARI GEARHEARD, COURTESY OF ILISAQSIVIK) 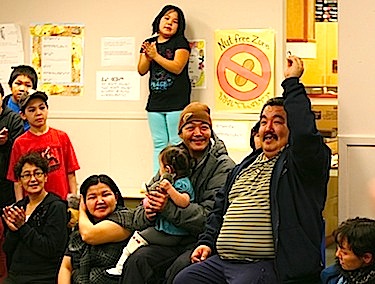 Joshua Akavak, the community justice outreach worker and elder’s programming co-ordinator at Ilisaqsivik, wins! Akavak was among about 100 staff, board members and their families who attended Ilisaqsivik’s annual Christmas party Dec. 15 in Clyde River. (PHOTO BY JORDAN NATANINE, COURTESY OF ILISAQSIVIK) 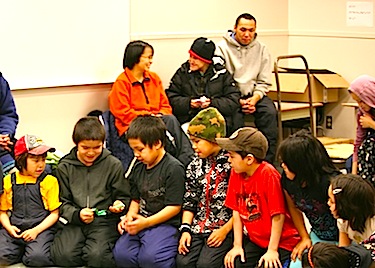 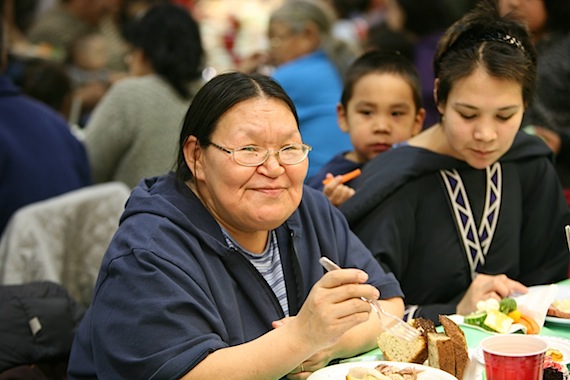 When more than 100 staff and board members of Clyde River’s Ilisaqsivik Society, along with their families, held their Christmas party Dec. 15, they had much to be grateful for: the cash-poor community’s wellness centre had made it through another year.

And earlier this month Ilisaqsivik received some unexpected recognition, when Tides Canada, the country’s largest public foundation dedicated to the environment and social justice, listed the centre among its “Top 10 recipients for 2011.”

The Tides Top 10 recognizes Canada’s “most innovative and forward-thinking projects and organizations that have demonstrated outstanding leadership, vision and real-world impact in addressing today’s most pressing environmental and social problems.”

That honour didn’t come with any money attached — but it’s intended to generate interest for Ilisaqsivik among potential donors and supporters, and it may open new doors to funding from foundations that will now “know we exist,” said Jakob Gearheard, Ilisaqsivik’s executive director.

Ilisaqsivik, whose programs include health and wellness programs for mothers and children, literacy programs, access to computers and counseling, while supporting a men’s healing group, women’s sewing circle, an elders’ group, youth council and Sukkakut, a group for women, remains in difficult financial straits, Gearheard said.

Ilisaqsivik continues to receive “lots of project funding — but we’re still in the exact same position we were eight years ago,” when the centre was in debt, launched a fundraising campaign and survived.

“I do not want anyone, government (Government of Nunavut, Feds), Inuit orgs, private foundations, politicians, to have the illusion that they can do nothing and just assume that Ilisaqsivik will still be here, ” he said. “We are not crying wolf.”

The $2 million in project funding that the society receives every year from a variety of sources barely covers Ilisaqsivik’s basic costs.

“As of right now, we are running a budget deficit. This is normal in the sense that every year we run a deficit until about November through January when (if we are lucky) we can break even. This situation exists every year because we have zero core funding,” Gearheard said. “All year it’s pretty stressful.”

This year is not looking good at all, he said.

“There is a very real possibility that we will finish the fiscal year with a deficit. We really need support. We are offering very high quality, culturally grounded, community-based wellness programming and we are getting recognition for this programming at the community, territorial and national levels, but we are so fragile financially that we can’t sleep at night. We need help. “

Every year involves a lot of risk-taking for Ilisaqsivik, he said, because they have to run projects and hire people, before they receive confirmation that they’ll get money to pay for it.

While the GN’s health and social services department is moving towards supplying Ilisaqsivik block funding in a multi-year agreement, it’s not core funding, Gearheard said.

The lack of financial stability and the stress of being on the frontlines to deal with social problems (“the reason why we need organizations like Ilisaqsivik is that bad things happen”), makes running a place like Ilisaqsivik challenging — even with a supportive board of directors and good staff, said Gearheard, who has been with Ilisaqsivik for eight years.

Recently Marie Ingram, the manager of Cambridge Bay’s busy wellness centre for the past three years, decided to leave her job at the end of January.

“That should be a warning signal for government or group that wants to promote wellness and IQ and Inuit empowerment,” Gearheard said. “Here,you have two organizations that are held as models and both of them screaming for a long time ‘yes, we are trying to do a good job, but no, we’re not an example financially of trying to do it.’ So you have these two organizations that could fold tomorrow.”

Ilisaqsivik closes Dec.16 and will re-open on Jan. 5.