Major parties finished neck and neck but lost ground to upstarts, while a controversial independence candidate failed to gain seat 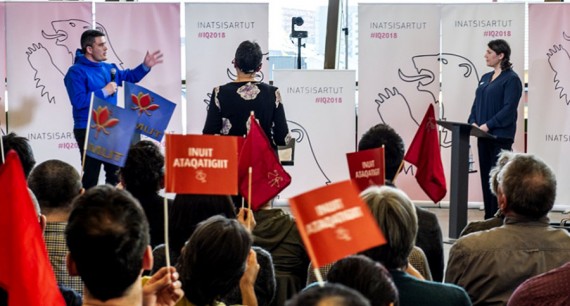 Kim Kielsen, leader of the Siumut party and Sara Olsvig, leader of the Inuit Ataqatigiit party, in a televised debate broadcast on April 22, just prior to Greenland’s April 24 election. Kielsen’s party managed to hold on to power, even though its popular vote fell by about seven per cent. Kielsen will now attempt to form a coalition government with other parties. (PHOTO COURTESY OF LEIFF JOSEFSEN, SERMITSIAQ)

Greenland’s Siumut party maintained its lock on political power in the self-ruling member of the Danish kingdom with the narrowest of wins in Tuesday’s election to Inatsisartut, the national assembly.

Siumut, a social democratic party that, with the exception of a single term between 2009 and 2013, has led Greenland’s government since the establishment of its national assembly in 1979, earned 27.2 per cent of the vote, according to election authorities.

The result put Siumut less than two percentage points ahead of its main rival, Inuit Ataqatigiit, which finished with 25.7 per cent of the vote.

A recount in Sisimiut, the country’s second-largest city, later put the leftist IA briefly in the lead, but when all was said and done, it was Siumut that was declared the election’s winner by a slightly larger margin than separated the two parties in the previous general election, on Nov. 28, 2014.

The win comes despite Siumut losing about seven percentage points in Tuesday’s voting, compared with the 2014 result. IA lost a similar proportion of votes nationally, despite gaining ground outside its traditional base in Nuuk, the capital, where it shed 14 per cent of its support.

Pending final vote-counting, Siumut will occupy nine of the 31 seats in Inatsisartut, two fewer than after the 2014 vote. IA will occupy eight seats, a loss of of three.

Both parties’ losses were due in large part to the resurgence of Demokraatit, a centrist party that has pushed for lower taxes, as well as to the emergence of two new parties at either end of the debate over whether Greenland should declare itself independent from the Kingdom of Denmark.

Kielsen will now begin negotiations to form a coalition government. In 2014, this process took about a week.

Prior to calling the snap election on March 6, Kielsen led a government that included IA. During the closing days of the election, the two party leaders left open the possibility of continuing their coalition, given their similar positions in most areas.

But several key issues, including fisheries and uranium mining, divide them, and Kielsen, whose cabinet has included members of most of the parties in Inatsisartut, is said to be keeping his options open.

Campaigning for the election focused squarely on domestic issues such as education, housing and infrastructure. This may have hindered significant advances by secessionist parties, and contributed to a near doubling of the number of votes collected by Demokraatit, which will now occupy six seats in Inatsisartut.

Greenland’s march towards independence remained a major topic of discussion in Denmark and abroad during campaigning.

Domestically, the topic was kept alive by a number controversial statements by Partii Naleraq, the third member of Kielsen’s governing coalition, which picked up a fourth seat, and Nunatta Qitornai, a secessionist party founded by a former member of Siumut and running in its first election.

Nunatta Qitornai earned a single seat but failed to earn enough votes to secure a seat for Aleqa Hammond, the outspoken former premier whose resignation amid accusations of misuse of public funds precipitated the 2014 election.

Hammond, who, on June 18, 2015, was elected to represent Greenland in the Folketing, the Danish national assembly, has seen her popularity suffer since being kicked out of Siumut due to further accusations of misusing public funds.

Hammond, whose 6,818 votes in the 2014 election set a record for a single candidate in Greenland, collected 156 votes in Tuesday’s voting.

This article is reproduced with permission from Arctic Today, where it originally appeared on April 25.