“She was a very gentle and kind lady but deeper down, she had something to say and that’s what I think her art was about” 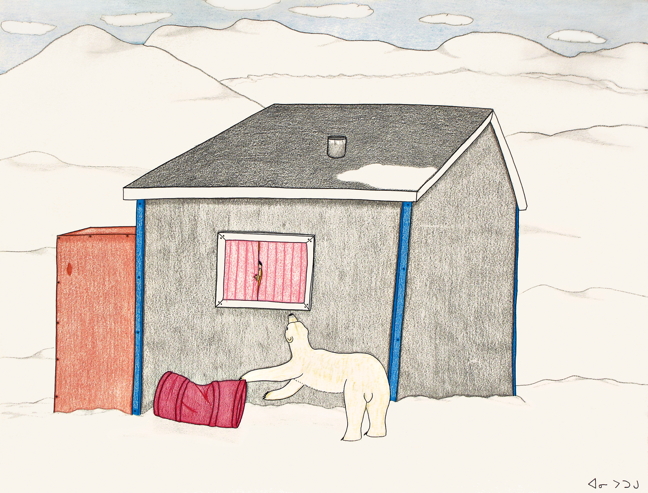 One of Bill Ritchie’s favourite drawings of Annie Pootoogook’s called “Bear by the Window,” a coloured pencil and ink drawing from 2006. (PHOTO COURTESY DORSET FINE ARTS) 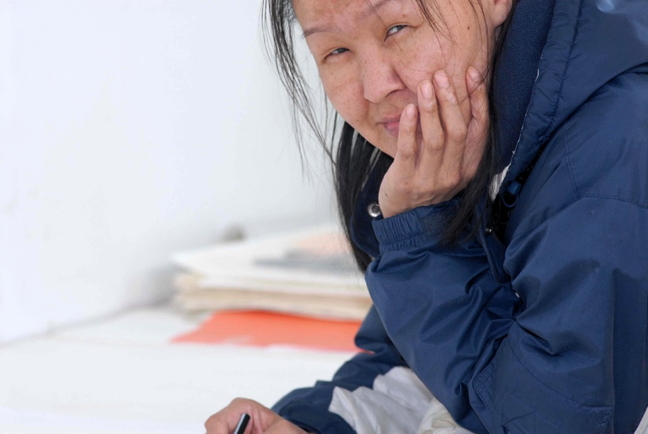 OTTAWA—She was influenced by a long line of strong, celebrated female artists and then stepped outside their shadows to win for herself a unique and permanent place in the fickle world of contemporary art.

And as Annie Pootoogook matured as an artist, curators, collectors and friends always wondered what part of modern Inuit life her eyes would rest on next and how those experiences would translate into drawings.

That anticipation came to an abrupt and mysterious end last week, hardly befitting such a talented and vibrant artist.

Pootoogook, winner of the prestigious 2006 Sobey Art Foundation Award, was found dead on the shore of the Rideau River in Ottawa’s Lowertown neighbourhood on Sept. 19. She was 46.

“To know that there will no longer be her art coming out, it’s such a sad feeling,” said South Baffin MLA David Joanasie who knew Pootoogook and her family growing up in Cape Dorset.

“She was not afraid to explore new ways and her own ideas of how she sees the world. A lot of scenes she drew were in homes, in living rooms and kitchens, and it’s just a glimpse into my childhood,” he said, marvelling. “Like exactly the same pictures I recall from my upbringing. She captured it so well.”

And though stories in mainstream media of late have focused on her sometimes troubling life in Ottawa—intermittent homelessness, addiction, panhandling, the loss of a child—those who paid tribute to her this week talked a different Annie they knew: impish, independent, resourceful, pioneering and ambitious.

“As a person, she was a very gentle and kind lady,” Joanasie said.

“But deeper down, she had something to say and that’s what I think her art was about. It was her way of saying ‘This is what I am. This is what we are as Inuit.’ And I think that will carry on. I’m sure people have been inspired by her work and will carry on this new art movement.”

Bill Ritchie, long time art buyer for the Kinngait Studios where Pootoogook used to sell her drawings and sometimes work when she lived in Cape Dorset, said she had her own vision and was unafraid to draw what she felt.

“I just saw her as a shining light in the development of what we’re trying to do here, to push back the stereotypical Inuit art,” said Ritchie who added that art—regardless of the political or cultural statement it makes—is a also just a way for many people in Cape Dorset to feed their families.

Pootoogook had many influences, Ritchie said, including her grandmother Pitseolak Ashoona, her mother Napatchie Pootoogook and some of Cape Dorset’s earliest superstars such as Kenojuak Ashevak and Kananginak Pootoogook, all now deceased.

Napatchie, who died in 2002, began her career drawing traditional themes in Inuit art—animals, people hunting, camping, dancing—but later began to portray some of the darker sides of modern Inuit life including suicide and addiction.

Pootoogook seemed to pick up where her mother left off.

Instead of drawing pretty pictures of northern nostalgia, she wanted to portray the world she lived in which included TV, video games, sex, alcohol, family violence, poverty and shopping at the co-op.

In fact, says Ritchie, Pootoogook broke down north-south cultural barriers by showing southern audiences that in some ways, the two worlds were not so different

“Annie was at the forefront of that shift,” he said.

“It was a big shift in thinking and I think the contemporary art world got it but I think the commercial art world, it got it to a degree, but there was some push back. They still wanted Kenojuak and Kananginak. They wanted the romance.”

In 2006, Pootoogook and her cousin Chris Pudlat, went to Montreal to attend the Sobey’s Art Foundation contemporary art awards gala.

Dressed to the nines and flanked by curators, art dealers and others, Pootoogook was hopeful, but doubtful, that she would win.

“I was with her when she won. She was very, very happy and excited. She was crying. She called one of our family members right away and then went on local radio soon after to tell all her friends and family,” said Pudlat, former art buyer for the Cape Dorset studio and now assistant manager for the West Baffin Eskimo Co-op.

Shortly after that, in 2007, Pootoogook moved to Montreal and then Ottawa to start a new phase of her life.

Many have suggested that the $50,000 prize, and the fame and expectations that went with it, caused Pootoogook undue stress and may have contributed to her tragic downfall into addiction and homelessness.

It’s true that Inuit have a long tradition of sharing wealth, from harvested animals to money, Ritchie said. And it’s possible success put pressure on her to keep providing for friends and family members in need.

“If Annie came back with $50,000 to this community, it might have been a daunting moment. I don’t know if anyone knows the truth of that. Annie knew the truth,” Ritchie said.

“But it’s really important not to speculate,” he said. “It’s so easy for us in our privileged southern lives to project that on to people.”

Pudlat, still grieving the loss of his sister along with many other family members and friends in the South Baffin community of 1,400, said he and others always beckoned her home when she called to say hello.

But she was unwilling to return, he said. Instead, she drew her troubles on paper saying it was a kind of therapy, that it helped her cope.

He added that Pootoogook was proud to be making art that was different from many of her peers, he said.

“She was a trailblazer. She opened doors for a new kind of art that started coming out of the north. Artists like Annie broke out of that mold and focused on contemporary life, from her own experiences today,” Pudlat said.

“And she started being recognized as a true artist, not being boxed into this confining category called ‘Inuit art.’ She was considered an artist who happened to be Inuit.”

The last time Ritchie saw Pootoogook was at the opening of “Dorset Seen,” a Carleton University Art Gallery exhibit of modern Cape Dorset works in 2013.

He’d heard that Pootoogook had been down on her luck so he was expecting the worst.

“It was quite an emotional reunion because we worked closely together for some time,” Ritchie said.

“I had expected to see this haggard street person and she looked fantastic. She was healthy, tanned and very sharp, dressed really nicely… That was the last memory we have of her.

“She was so sweet. She always credited me with helping her move forward But that was just Annie being Annie. It was her that moved her career forward.”

As of our press time, there were no memorials planned in Ottawa or Cape Dorset.

Police have retained Pootoogook’s remains for evidence in their on-going investigation into the circumstances of her death.

The lead investigator told Nunatsiaq News that there are “suspicious elements” to the case and that they continue to piece together Pootoogook’s final days and hours.

Just before our press time, new broke that the Ottawa Police Service was investigating whether one of its members had posted an online comment to a news story denigrating Pootoogook, and Aboriginal people.

“She got drunk and fell in the river and drowned who knows… typically many Aboriginals have very short lifespans, talent or not,” said one of two posts allegedly attributed to the OPS member.

A product inquiry this week to Feheley Fine Arts in Toronto for the 26-by-20-inch “Abstract Sedna,” an original drawing by Annie Pootoogook, yielded a current value of $2,400. 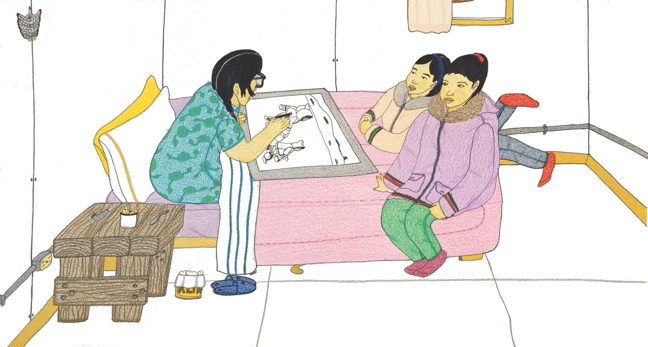