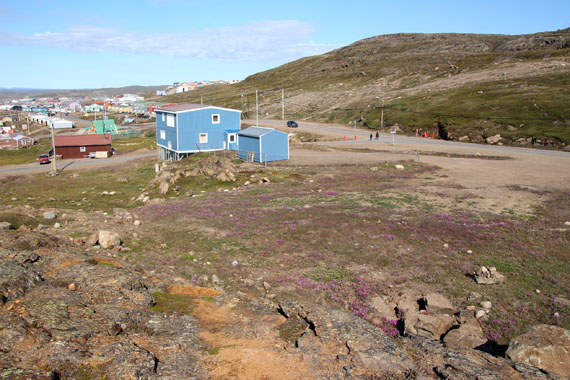 Iqaluit’s Panaq Design Inc. will design a 60-child daycare to be built at the corner of Paunna Rd. and the Road to Apex. (PHOTO BY BETH BROWN)

The link between Iqaluit’s Tundra Buddies Day Care Society and a new child care centre whose construction will be funded by Indigenous and Northern Affairs Canada was confirmed Aug. 3, when the federal department announced an award for a contract to design the building.

The Montreal based company EVOQ Architecture Inc. will design the 60-place child care centre, to be operated by the non-profit society after it opens in 2019.

The $721,030 contract, which covers design only, mandates that the company employ a percentage of Inuit labour, sub-consultants, and suppliers.

That’s why EVOQ, which has had its hand in Inuit and First Nations focused projects for 30 years, has sub-contracted a consultant group, Iqaluit’s Inuit-owned Panaq Design, to help with the job.

The six-figure contract does not include construction of the building at the corner of the Apex Rd. and Paunna Rd., near the new Joamie Court subdivision.

Previous reporting by Iqaluit media suggests that the long-planned child care centre is being built to increase employee retention within federal government workplaces.

Rachel Théorêt-Gosselin, president of the Tundra Buddies Day Care Society, told Nunatsiaq News last month that wait times for daycare in the city are as long as three years.

She said many families who moved to Iqaluit, like she did in 2014, must employ live-in nannies or look for unlicensed child care.

The new child care centre, which will be the largest in the territory, will employ at least 12 child care workers.

“INAC is funding the design and construction of the daycare, while [the] not-for- profit Tundra Buddies Day Care Society will be the private operator of the new daycare,” said an Aug. 3 release from INAC.

“The society is exploring partnership options with the community in an effort to be inclusive and representative of the city’s residents.”

Théorêt-Gosselin said July 18 that for many families who are looking for childcare, lack of access is more of a concern than cost. As the child care centre is to be privately run, the price per child will be determined based on wages and operating costs, she said.

“This new daycare, will contribute to healthier, more sustainable communities by providing more people in Iqaluit with options to pursue education or to work outside the home,” Bennett said.

The design process will include consultation with Iqaluit residents, the release said.